Ever since Deikun was a mere street activist, she has sympathized with his ideas and given him both material and moral support. Shortly after Deikun took center stage in Munzo's government, she withdrew from the front lines due to illness. She despises Astraia, who was able to bear Deikun heirs. 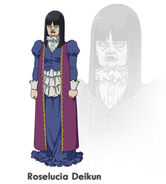 Retrieved from "https://gundam.fandom.com/wiki/Roselucia_Deikun?oldid=483382"
Community content is available under CC-BY-SA unless otherwise noted.