Rondo Mina Sahaku (ロンド・ミナ・サハク, Rondo Mina Sahaku?) was a character introduced in Mobile Suit Gundam SEED Astray. She is the twin sister of Rondo Gina Sahaku, both of whom were Coordinators and who were members of the Orb Union's nobility.

While Rondo Gina was male and Rondo Mina was female, the two looked nearly identical. In addition to their appearance, they also shared the desire for Orb to rule the Earth Sphere (however, Gina seems to have been more tyrannical and aggressive than his sister). To achieve that goal, they initiated Morgenroete's collaboration with the Earth Alliance in building the G Project mobile suits on Heliopolis. While providing genuine assistance, Morgenroete also stole data on many elements of the G Project in order to create their own prototype mobile suits, the MBF-P01 Astray Gold Frame, MBF-P02 Astray Red Frame, MBF-P03 Astray Blue Frame, MBF-P04 Astray Green Frame and the MBF-P05 Gundam Astray Unit 5. When Heliopolis came under ZAFT attack, Morgenroete planned to destroy the Astrays and erase all evidence of their actions, but Gina had other ideas. He ordered the uploading of the prototype Natural-use operating system into Red Frame and data on multiple hardware upgrades into Blue Frame, then escaped the colony using Gold Frame and a bazooka Morgenroete had designed for the GAT-X102 Duel. However, his intent to recover the other two Astrays was inadvertently thwarted by a Junk Guild team and the Serpent Tail mercenaries, who took possession of Red Frame and Blue Frame.

Later, shortly after the death of their father Koto Sahaku left Gina as the head of the family, the Sahakus acquired several powerful Earth Alliance mobile suits, piloted by Socius series Combat Coordinators, through secret arrangements with Blue Cosmos leader Muruta Azrael (who most likely was unaware of the Sahakus being Coordinators), and also carried out covert missions on behalf of Azrael. These missions, carried out personally by Gina as the pilot of the Gold Frame, eventually let to conflict with the pilots of Orb's lost Red Frame and Blue Frame, Junk Guild technician Lowe Guele and Serpent Tail leader Gai Murakumo. The first two battles proved inconclusive, but the third cost Gina his life at Gai's hands.

With the death of her brother and inspired by what Lowe said during an encounter, Mina abandoned her ambitions and was content to simply defend the Ame-no-Mihashira and protect the refugees from Orb who had gathered there after its fall. After the war's end, Mina dispersed the forces under her command to await the restoration of the Orb Union. Later, Mina and three of her Socius clones joined forces with the Junk Guild and Serpent Tail in a failed attempt to stop the "Break the World" terrorist attack by shooting Junius 7's remains with GENESIS Alpha.

Shortly afterward, Mina was a guest at the wedding of Cagalli Yula Athha and Yuna Roma Seiran, and witnessed the "abduction" of Cagalli by her twin brother Kira Yamato. When Martian pilot Ergnes Brahe attempted to pursue Kira in his GSF-YAM01 Δ Astray, Mina boarded her Amatsu and blocked his path, convincing him that "rescuing" Cagalli would not be in her best interest.

in the Gundam SEED VS Astray story, Rondo Gina Sahaku comes back as a Carbon Human working for the mysterious organization Librarian Works, and pilots the MBF-P05LM Astray Mirage Frame. A confrontation with Librarian Works begins when Gina and Finis Socius attacks the Ame-no-Mihashira, forcing Mina to launch in her Astray Gold Frame Amatsu Mina. Fighting her brother Gina had been an agonizing decision for her, but she was unable to come to terms with his obsessively old ways of thinking. Gold versus Gold, the flames of battle are lit by brother and sister.

Mina selects Lath Winslet and Kazahana Adja as candidates to become her successor. 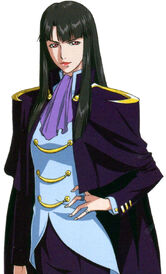 Retrieved from "https://gundam.fandom.com/wiki/Rondo_Mina_Sahaku?oldid=426616"
Community content is available under CC-BY-SA unless otherwise noted.