Rondo Gina Sahaku (ロンド・ギナ・サハク, Rondo Gina Sahaku?) is introduced in Mobile Suit Gundam SEED Astray as the main antagonist. He is the younger twin brother of Rondo Mina Sahaku, both of whom were Coordinators and who were members of the Orb Union's nobility. The Gundam Astray Gold Frame Amatsu is his personal machine. He returns as a Carbon Human in Mobile Suit Gundam SEED VS Astray, where he pilots the Gundam Astray Mirage Frame and its upgraded form.

While Rondo Gina was male and Rondo Mina was female, the two looked nearly identical. In addition to their appearance, they also shared the desire for Orb to rule the Earth Sphere (however, Gina seems to have been more tyrannical and aggressive than his sister). To achieve that goal, they initiated Morgenroete's collaboration with the Earth Alliance in building the G Project mobile suits on Heliopolis. While providing genuine assistance, Morgenroete also stole data on many elements of the G Project in order to create their own prototype mobile suits, the MBF-P01 Astray Gold Frame, MBF-P02 Astray Red Frame, MBF-P03 Astray Blue Frame, MBF-P04 Astray Green Frame and the MBF-P05 Gundam Astray Unit 5. When Heliopolis came under ZAFT attack, Morgenroete planned to destroy the Astrays and erase all evidence of their actions, but Gina had other ideas. He uploaded a prototype Natural-use operating system into Red Frame and data on multiple hardware upgrades into Blue Frame, then escaped the colony using Gold Frame and a heavy bazooka Morgenroete had designed for the GAT-X102 Duel. However, his intent to recover the other two Astrays was inadvertently thwarted by a Junk Guild team and the Serpent Tail mercenaries, who took possession of Red Frame and Blue Frame.

Later, shortly after the death of their father Koto Sahaku left Gina as the head of the family, the Sahakus acquired several powerful Earth Alliance mobile suits, piloted by Socius series Combat Coordinators, through secret arrangements with Blue Cosmos leader Muruta Azrael (who most likely was unaware of the Sahakus being Coordinators), and also carried out covert missions on behalf of Azrael. These missions, carried out personally by Gina as the pilot of the Gold Frame, eventually led to conflict with the pilots of Orb's lost Red Frame and Blue Frame, Junk Guild technician Lowe Guele and Serpent Tail leader Gai Murakumo. The first two battles proved inconclusive, but the third cost Gina his life at Gai's hands.

Rondo Gina Sahaku is revived as a Carbon Human working for Librarian Works and pilots the MBF-P05LM Gundam Astray Mirage Frame. He is deployed alongside Finis Socius in the attack on Ame-no-Mihashira and defeats his sister, Rondo Mina Sahaku. After the battle, Gina faces off against Gai Murakumo at the space station Ame-no-Mihashira as well. Gina loses the battle against Gai and retreats back to the Librarian Works base. Rondo Gina Sahaku’s Mirage Frame, which lost in battle to Gai’s Blue Revise is upgraded into MBF-P05LM2 Gundam Astray Mirage Frame 2nd Issue. To pilot Gundam Astray Mirage Frame 2nd Issue Gina enhances his own physical body as well. Using Libriarian's advanced medical technology, Gina's body is implanted with synthetic blood vessels, artificial blood (perfluorocarbon-based oxygen carriers), and a carbon skeleton. A device for controlling the flow of artificial blood is installed on Gina's forehead. These modifications enhance Gina's reaction and thinking speed, and allows him to withstand the immense Gs when piloting the Mirage Frame 2nd Issue.

After completion, Gina boards the Second Issue to seek revenge against Gai, but his attack is halted by the Nebula Blitz under the direct command of Prayer, the Supreme Librarian. As he refuses to obey Prayer's orders a battle soon occurs. During the battle, Gina manages to figure out Nebula Blitz's teleportation trick and easily defeats the team of Nebula Blitz Gundams. He later meets with ND HE who is sent by Prayer to accompany him. While searching for Gai, Gina observes ND HE carefully and deduces that he is a Carbon Human clone of Gai. Upset by this fact, Gina fights with ND HE but their battle is interrupted, first by the presence of Canard and then later by Gai. His second match with Gai did not turn out as he expects, he fell for Gai's mind trick and lost. He would then have his MS upgraded again in order to defeat Gai. The result of the third battle between him and Gai is unknown.

He is however, shown to be alive in the epilogue of VS Astray, having Finis Socius and Ile De Llorar by his side. Mina comments on how her little brother is already dead, but she still decides to save him anyway. 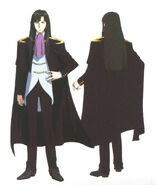 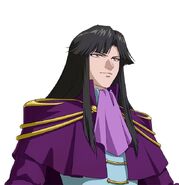 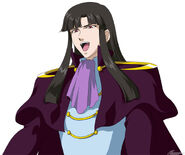 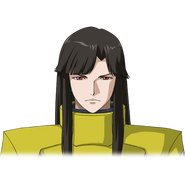