Rommel is a powerful strategist who leads the 7th Panzer Division. Although he may appear frivolous, he enjoys a tough battle, but would so no mercy to members of his own forces if they fail him spectacularly. Despite his professional demeanour, he is usually comfortable with other Divers, particularly girls, petting his ermine form.

A powerful strategist, making use of misinfomation, diversionary tactics and forward planning to achieve victory. He is also well adept in one-on-one combat. 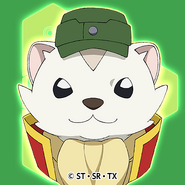