Roiza is a fictional character from the After War Gundam X anime.

The leader of Satelicon, both the military faction and the civilian part, Commander Roiza is deeply opposed to the ideals promoted by Cloud 9 and the Space Revolutionary Army. Together with his aging mobile suits and a single space battleship built on the asteroid, he fights against the SRA and its leader, eventually losing his life as the asteroid is destroyed by photon particle torpedoes. 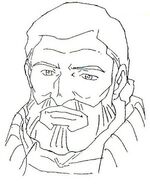 Retrieved from "https://gundam.fandom.com/wiki/Roiza?oldid=349734"
Community content is available under CC-BY-SA unless otherwise noted.