The Gundam Wiki
Register
Don't have an account?
Sign In
Advertisement
in: Characters, After Colony characters, Male
English

Roche Nattono (ロッシェ・ナトゥーノ, Roche Nattono?) is a character from the manga New Mobile Report Gundam Wing Dual Story: G-Unit. He pilots the OZ-06MS-SS1 Leo-S as a member of OZ Prize, and later the OZX-GU01LOB Gundam L.O. Booster after his defection to MO-V.

Roche Nattono begins the series as the leader of OZ Prize's Stardust Knights unit, operating aboard the Grand Chariot. Roche is devoted to knightly honor and pride above all things. However, that pride gets the best of him when he is humiliated in battle against Odin Bernett, and he becomes enraged at his supposed inferiority. After Valder Farkill assumes leadership of Prize, Roche was betrayed by his subordinate Kratz Silvy. Roche is later rescued by MO-V and joins their side soon after, where he learns to keep his emotions in check. Fighting alongside the Bernett brothers in defense of the colony, he comes to respect Odin as a teammate and recognizes him as a strong pilot in his own right and is at the scene of the final battle. He and Aretha Walker are both present at the Bernett-Farrell wedding at the conclusion of the manga. They leave together discreetly, Roche stating that they will meet the Bernetts again. 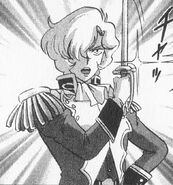 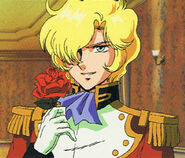