Robert Spacey (ロベール・スペイシー, Robēru Supeishī?) is a Mobile Suit Development Historian in Mobile Suit Gundam 00V. He was initially studying political history, but after experiencing the revolution brought by Celestial Being when he was 30 years old and coincidentally seeing the Avalanche Exia in action, he switched his study to MS development history. In Gundam 00V, Robert (50 at the time of writing) recounts the stories behind the Gundams and other Mobile Suits around the time when Celestial Being appeared and changed the face of mobile suit development.

Robert is seen as a diligent, curious, and loyal person. Robert is willing to interact with others in order to get the facts.

Little is actually known about Robert, though as a historian, it is implied that he has a vast knowledge about past events in the Anno Domini timeline. He is also shown to have some knowledge of how Mobile Suits work, and can even point out flaws in a design, such as when he modified the simulated GN-007/AL Arios Gundam Ascalon into the more efficient GN-007GNHW/M Arios Gundam GNHW/M.

In 2306 AD, Robert was attending a HRL military exercise in preparation for HRL Tenchu's 10th anniversary the following year. During the exercise, four AEU-05 AEU Hellion from an unknown group appeared, causing a panic among the guests. During the chaos, Robert bumped into Deborah Galiena, a UN test pilot attending the ceremony. The HRL eventually took care of the Hellions and shot them down using their MSJ-06II-AC Tieren Antiaircraft Cannon Types, but Deborah's cool and levelheadedness during the incident left a great impression on Robert.

In 2307 AD, Robert, who was a young political historiographer that time, was following a UN inspection of the Union Army. The Union had problem of increasing its armed presence in South America, and Robert was there to collect data for study purposes. As he was conversing with the inspection test pilot, Deborah Galiena, the GN-001/hs-A01 Gundam Avalanche Exia suddenly appeared on the air space. The base immediately sent out its squadron of Flags to intercept the Gundam, but they were outmaneuvered and destroyed within minutes. Robert was there to see the battle, and the Avalanche Exia's performance inspired him to pursue study about Mobile Suit development.

The HRL Orbital Elevator, Tenchu, was often targeted by terrorist attacks, and battles around the area were almost natural occurrences. During Robert's stay in a city at the Tenchu, a battle was happening between the HRL army and the terrorist. Robert was hoping for the Gundams to appear, but they hadn't made an appearance - to his disappointment. As he was about to meet his friend Deborah at a nearby resort, he eventually witnessed a Gundam in action; the GN-002/DG014 Gundam Dynames Torpedo was shooting the forces at the orbital elevator from several miles away.

Battle in Okinawa Base

At the time, Robert was about to meet with Deborah at the American base in Okinawa to discuss some issues. When he got there, Deborah was already testing the SVMS-01SG Union Flag Ground Package Shell Type and its features. Coincidentally, at the worst possible time, Deborah encountered the GN-001 Gundam Exia, leading to a battle. The Shell Flag managed to withstand a strike from the Gundam, and with her exceptional piloting skills, Deborah survived the encounter uninjured. No one knew the reason for the Exia's presence at the Okinawa base, but Robert later noted in his book that the Gundam's attack was possibly an accident.

During the Team Trinity armed operations, Deborah received an invitation from UN representative Alejandro Corner to a secret institution. Deborah felt uneasy about the invitation, and asked to allow her to bring Robert with her. At the location, Robert and Deborah discovered the GNX-509T Throne Varanus, surprising both of them at the sight of the "fourth Throne." Alejandro Corner then revealed that his family had been members of Celestial Being, but had betrayed the organization for the right reasons. Using Deborah's data and advice on piloting the Throne Varanus, Alejandro hoped to mass-produce the unit in able to fight against the Gundams.

Deborah willingly volunteered to test the mobile suit on several runs, believing that her efforts would eventually bring peace to the world. However, one day, Deborah and Robert were informed by a boy named Ribbons Almark about Alejandro's real motives. Fearing that they would be disposed after the development of GNX-603T GN-X, Deborah and Robert planned their escape using a SVMS-01AP Union Flag Orbit Package Colony Guard Type. They planned to seek temporary refuge in a Union space colony at Lagrange 1 and decided to get in touch with the media through Kinue Crossroad.

After escaping from Alejandro Corner, Robert and Deborah reached a satellite asteroid in Lagrange 1. Unknown to them, one of Celestial Being's base was also located around the area. They accidentally landed into one of the base where Fereshte was residing and stumbled upon the parts of the GN-004/te-A02 Gundam Nadleeh Akwos. As they examine it, a man with handcuffs came in and explained the purpose of the parts and the concept mobile suit in question.

Robert and Deborah went to Japan to try to contact Kinue Crossroad, but by the time of their arrival, she had already passed away. Fearing for their lives, both of them sought refuge at the Union Okinawa base, where Deborah had been stationed in the past. During that time, the UN had already defeated Celestial Being in their final battle at Lagrange 1.

In the Okinawa base, Robert met a young man named Amy Zimbalist, who was one of the pilots of the Shell Flag. Robert recounts that Amy was awful at piloting the mobile suit, taking him a while to make it to walk. Amy would later pilot his own GN mobile suit, the GNX-604T Advanced GN-X, which would earn him the title of "Steel Cowboy" for his exceptional piloting of the MS. Robert and Deborah's future encounters with Amy would develop into friendship; encounters which Robert notes as work brought on by fate.

Robert arrived at Celestial Being's Lagrange 3 base and seemingly is an acquaintance of Ian Vashti's. He came to this absolutely secret establishment with the pretext of assisting in mobile suit development. When the GN-007/AL Arios Gundam Ascalon was undergoing test simulation, Robert Spacey interrupted Sherilyn Hyde saying, "Could I have a minute with you?" He then tampered with the data for Arios Ascalon's simulation, and removed almost all of the armaments except for the missile containers. Sherilyn was angry, but when she saw the data, Arios showed a high performance in cooperation with Archer that is by far the best it ever had. Even Sherilyn said "Isn't this cool..." and acknowledged Robert's suggestion. Finally, the updated machine with this equipment is called "Arios Gundam GHNW/M".

After the battle with the Innovades, CB concealed themselves. At around this time, Robert met Billy Katagiri. Billy didn't want to clarify much about his cooperation with the Innovades, and then his temporary joint action with CB. However, thereupon Robert says he's interested only in MS production, and while laughing informed that he too was with CB, and Billy's worries melted away. Billy exchanges news with Robert and tells the latter about the GNZ-001 GRM Gundam. It seems that the GRM Gundam is still inside the CB mothership, and will probably sooner or later discovered. And now, the CB mothership is under surveillance of the Federation, and they are progressing with the internal inspections. After this, they forget the time and talked about Mobile Suits with great enthusiasm. 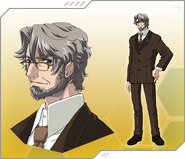