Robert Gomez (ロベルト・ゴメス) is a fictional character in Mobile Suit Victory Gundam. He is 55 years old, an a captain in the Earth Federation Forces.

Robert Gomez is the captain of Reinforce. He appears first as a pilot of planes camouflaged under the PCST to transport the LM312V04 Victory Gundam to Arti Gibraltar. Subsequently, he commanded Reinforce when he joined the other vessels of the League Militaire in space.

He commanded the Reinforce Junior throughout the conflict until his death in the battle of Angel Halo. He battered the heavily damaged ship into the enemy fleet, using its damaged reactors to destroy the rest of the Motorad fleet. 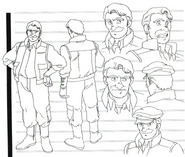 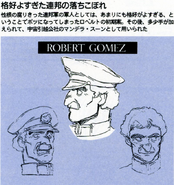