Rimia Greenwood (リミア・グリンウッド) is a character who appears in the MSV-R: The Return of Johnny Ridden manga series. She works for the Federation Survey Service (F.S.S.) with Led Wayline and Ashley Brown Brandon, gathering and analyzing information on obscure mobile weapons developed during the One Year War.

A young woman who hails from the Republic of Zeon, Rimia was a graduate student in engineering who was transferred to the Earth Federation as part of a human resources exchange program in U.C. 0086. Rimia is quite the mechanical whiz, as she's immersed in mobile suit technology. She is the daughter of famed Zeon ace pilot Roy Greenwood. She developed a particular interest in the One Year War, a major life changing event for not only herself but for the entire world. Because of this fascination combined with her knowledge of mobile suits Rimia became something of an expert on One Year War machines and is currently involved in an extensive research project to study experimental designs from the war. 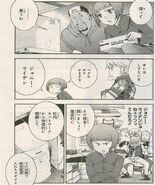