A 14-year-old boy who attends middle school in a coastal city. His agility and good reflexes enable him to do everything flawlessly, but he is still searching for his true passion. After witnessing Kyoya Kujo in Gunpla Battle, he is filled with enthusiasm and decides to dive into the GBN world.[1]

Riku possesses good reflexes and reaction speed. He also has good piloting skills despite being a beginner as Ogre stated that his movements were not that of a beginner, this is also shown as he could fight toe to toe against Ogre, losing only due to his Gunpla being unable to handle Trans-Am.

For his debut in the Gunpla Battle Nexus Online (GBN), Riku decided to build a new Gunpla. While shopping for Gunpla with his best friend Yukio Hidaka, a mysterious force led Riku to pick the GN-0000 00 Gundam as his choice. Later, Yukio recommended customizing the Gunpla as that would change its performance. At home, Riku modified the Gunpla into the GN-0000DVR Gundam 00 Diver with custom parts derived from his other Gunplas. In his first day in GBN, Riku learned the controls of Gundam 00 Diver via a tutorial battle, and defeated Do-ji, who has been harassing other beginners, with help from Yukio and his RGM-86RBM GM III Beam Master‎.[2]

The second trip into GBN had Riku test out Gundam 00 Diver's Trans-Am, as suggested by Yukio. Gundam 00 Diver activated Trans-Am successfully, but Riku stopped the system when Sarah cried out that the Gunpla is suffering, and multiple warnings appeared on his screen. Sarah then made Riku promise her not to use the system. However, Riku was forced to break the promise during the battle with Ogre and his Ogre GN-X, causing a GN Drive to blow out. After the defeat, Riku realized that he wasn't strong enough and reaffirmed his promise to Sarah.[3]

Later, as a means to prepare for Build Divers' (Riku's force) first Force Battle, Riku designed the Diver Ace Unit and new weaponry for the Gundam 00 Diver, and with help from Koichi, the parts were produced and subsequently assembled by Riku, creating the GN-0000DVR/A Gundam 00 Diver Ace. During the Force Battle, the Build Divers came up against the rookie subdivision of Rommel's 7th Panzer Division, the 7th Military Academy and obtained a complete victory. In this debut battle for the 00 Diver Ace, Riku used it to defeat the leader of the 7th Military Academy in a one-on-one fight.[4]

The Build Divers then participated in the Battle-Random mission, and upon learning that the opponent was Ogre's force, Hyakki, Riku resolved to battle without using the Trans-Am System. He didn't want to overestimate his strength again as he did in his first fight with Ogre, and also because he wants to be strong enough to win without using the system. During the mission, Riku and his 00 Diver Ace first fought against Do-ji and his xvt-mmc Geara Ghirarga. As soon as he defeated Do-ji, Ogre and his GNX-803OG Ogre GN-X arrived. After a brief exchange of blows, Ogre activated the Ogre GN-X's Trans-Am. Initially, Riku and the 00 Diver Ace was able to hold back the opponent, but was eventually overwhelmed. The fight was interpreted when Do-ji activated the Geara Ghirarga's Break Decal. The 00 Diver Ace then teamed up with Ogre GN-X to shut down the out of control Gunpla. Riku's second battle with Ogre was inconclusive, as Ogre decided to forfeit the mission due to Do-ji's use of the Break Decal.[5]

Riku and 00 Diver Ace, along with other members of the Build Divers, then participated in the Coalition of Volunteers' assault on the base of the Break Decal's mastermind, Tsukasa Shiba.[6] After entering the base, Riku was caught off guard by his teammate, Ayame's, betrayal, and the 00 Diver Ace briefly fought against the true form of her RX-Zeromaru. After Riku and Sarah convinced Ayame to return to the right path, a mercenary hired by the mastermind appeared. The 00 Diver Ace attacked the mercenary's Gunpla, but it deflected all of the attacks. Ayame and her RX-Zeromaru then intervened, allowing Riku and Sarah to be on their way to Tsukasa's room.[7]

When Tsukasa's MA-08 Big Zam and its powerful Break Decal threatened to collapse the entire GBN, Riku was convinced by Sarah to activate the 00 Diver Ace's Trans-Am System. Despite its improved performance, the 00 Diver Ace was still no match for the invulnerable Big Zam and lost its GN Diver Swords and left hand during the assault. The bleak situation was turned around when Sarah declared her desire to be with Riku and everyone else in GBN, and the 00 Diver Ace unleashed two Trans-Am wings. Draping the wings on the Big Zam, the Break Decal's effect was mysteriously nullified. The Big Zam also became vulnerable to attacks from the Coalition's Gunpla, with Riku and 00 Diver Ace delivering the final blow.[8]

Desiring revenge and accusing Riku of being a hypocrite, Tsukasa lured him to an abandoned warehouse for a round of Gunpla Battle using the old GP Duel system, with the promise of returning the original SD Gundam that Ayame sought to regain. During the battle, Riku's 00 Diver Ace was badly beaten by Tsukasa's Gundam Astray No-Name and his ferocious battle style. However, Tsukasa's constant taunting and Sarah's despair at being unable to help him allowed Riku to find the strength to fight back. He then activated the 00 Diver Ace's Trans-Am and fought on an even level with Tsukasa. After the Trans-Am came to an end, both Riku and Tsukasa launched their final attacks. 00 Diver Ace was beheaded, but its GN Beam Saber penetrated the Astray No-Name's body, and Riku won the match. When Yukio Hidaka, Momoka Yashiro and Koichi Nanase found Riku, he was cradling the ravaged Gunpla, promising to rebuild it better.[9]

After Riku's battle against Tsukasa Shiba, he was lost as to how to rebuild the 00 Diver Ace, and began revisiting GBN locations and talking to the friends he had made through the game. He then revealed to Sarah his wish to hear 00 Diver Ace's 'voice'. When the two held hands and Riku reaches toward the Gunpla with his other hand, he had a mysterious vision that ended in the silhouette of a Gunpla. Inspired, Riku rebuilt the 00 Diver Ace into the GN-0000DVR/S Gundam 00 Sky based on the image he saw, with the assistance from the members of his Build Divers force. He retained the chest scar of the 00 Diver Ace, but covered it with a clear piece, to serve as a reminder of his past battles.[10]

Upon accepting Tigerwolf's challenge to fight him in the Ryukosai, Riku modified the 00 Sky to incorporate the new 'Lash Position' for hand-to-hand combat. Mid-battle during the fight with Tigerwolf, Riku created his very own Finish Move in desperation, but came up short as his Gunpla wasn't designed to handle the powerful attack.[11]

When Sarah was taken into custody by the second Coalition of Volunteers, Riku prepared for the intense battle to come by building the Heavy Weapon System, creating the GN-0000DVR/S/HWS Gundam 00 Sky HWS‎‎. Although Riku was ambushed by a team led by Randy, he managed to overcome them but lost all the Heavy Weapons System's parts.[12] Riku and 00 Sky then met Kyoya Kujo and his AGE-IIMG-SV Gundam AGEII Magnum SV ver., and the two engaged in a fierce fight. Upon urging from Kyoya to go all out, Riku activated the 00 Sky's Trans-Am Infinity and Kyoya responded with the AGEII Magnum SV ver.'s FX Plosion. They then had a high speed aerial battle, crashing through multiple floating islands, cumulating in the 00 Sky firing an energy arrow which Kyoya blocked before downing the 00 Sky. As Riku was about to defeated, Ogre and his Gundam GP-Rase-Two intervened. It was then revealed that Ogre had applied for his force, Hyakki, to be allied with the Build Divers just before the start of the battle.[13]

When Ogre was close to defeat, Riku came to his aid and the two jointly fought the Champion. They activated their Gunplas' unique Trans-Am systems, but were still at a disadvantage against Kyoya and the AGEII Magnum SV ver.'s FX Plosion. However, Riku and Ogre refused to give up and attacked with their Gunplas' finish moves. Kyoya responded with the 'EX Calibur' attack and the resulting clash caused a huge shockwave that knocked back numerous other Gunplas in the area. Eventually, Riku and Ogre's finish moves managed to overwhelmed Kyoya and his Gunpla. Riku then flew off in the 00 Sky to rescue Sarah and claim victory.[13] Unknown to Riku, a member of Force Avalon, Hiroto Kuga, actually had him in his sights. However, the last words of Eve caused Hiroto to change his mind on shooting Riku down.

Riku's classmate and best friend. He is a reliable diver for Riku.

Riku's classmate and plays for the women's football club. She has a very aggressive personality and takes pleasure in building Gunpla with Riku. 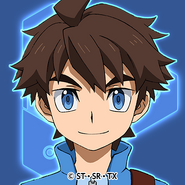 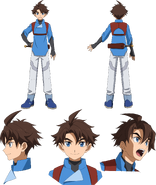