Her short stature and youthful features give her a bit of a complex that others may see and treat her like a child. Despite being a Coordinator, she was born practically blind, presumably due to complications in the genetic manipulation process. That's why she needs to wear an electronic device that resembles conventional glasses in order to see effectively. When at the helm of a Mobile Suit, she puts on another kind of electronic vision device in the form of a visor.

Through her hard work, she became a skilled mobile suit pilot as signified by her wearing of the Red ZAFT uniform.

Riika first appeared as a test pilot for the ZGMF-X88S Gaia Gundam. During the Armory One Incident, she launched in her custom colored ZGMF-1001/M Blaze ZAKU Phantom to repeal the enemy. Some time later, she and her Blaze ZAKU Phantom escorted a shuttle transporting the captured Bernadette Leroux and Edward Harrelson for handing over to the Earth Alliance. As she met with Morgan Chevalier and his TS-MA4F Exus, they were attacked by Ile De Llorar and his ZGMF-YX21R Proto-Saviour. Riika's Blaze ZAKU Phantom was disabled by the Proto-Saviour's virus, but luckily, Jean Carry soon arrived in his MBF-M1A M1A Astray with a modified Verne 35A/MPFM Multipurpose Flight Module and managed to force Ile to retreat.

In Mobile Suit Gundam SEED ASTRAY Princess of the Sky, Riika is the pilot of Lord Astray Z. 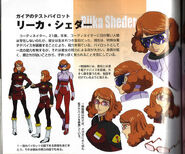 Retrieved from "https://gundam.fandom.com/wiki/Riika_Sheder?oldid=443098"
Community content is available under CC-BY-SA unless otherwise noted.