The Rhinoceros (ライノサラス Rainosarasu) is a prototype ground mobile armor that is featured in the Mobile Suit Gundam Side Story 0079: Rise From The Ashes video game.

A large mobile armor developed through hurried construction for the base defense role by Zeon field engineers in Australia using spare parts, its performance and development background remain unclear. It uses a Zaku II torso, which is characterized by built-in machine gun arms. It is mounted on a large thermo-nuclear hover unit base, the rear fuselage is equipped with two heavy machine gun turrets. Despite being armed with a variety weapons, the Rhinoceros is lightly armored and has a short operating time due to cooling problems. It is operated by a crew of three.

Both of Rhinoceros' arms are befitted with large-caliber machine guns in place of regular MS manipulators. They are used for attacking enemy's mobile weapons in close range when the 200mm Main Gun or Burstliner Cannon is deemed unsuitable for such purpose.

Mounted on each shoulder of Rhinoceros is a retangular missile launcher which contains a total of 18 missiles which can be fired individually or in a massive volley for heavy bombardment against incoming enemies.

Located at both flank of Rhinoceros' main body are heavy machine gun turrets of unknown caliber. Each turret can be rotated at 360 degrees to protect the giant mobile armor rear side from incoming enemies.

Located on top of Rhinoceros' torso, the 200mm Main Cannon is the main weapon for the mobile armor in Type A set-up. A long-barreled, shell-firing artillery weapon which has a smaller caliber than the those of Guncannon and GM Cannon but features longer bombardment range and more destructive power.

Located on top of Rhinoceros' torso, the Burstliner Cannon is the main weapon for the mobile armor in Type B set-up. This mega particle-based cannon is taken from a Earth Federation's Burstliner weapon platform being stolen by Zeon Forces in Australia. The power output of the Burstliner cannon is on par with battleship-grade mega particle cannon.

A single Rhinoceros unit was constructed and deployed in the defense of Zeon's Hughenden Fortress in Australia, only to be destroyed by the White Dingo Team. 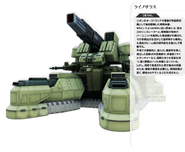