Rey is a calm and collected character who does not show much emotion, but in front of Gilbert Durandal, the person who raised him, he can be so happy that he blushes. Perhaps because Rey has a "family" like Gilbert and friends of the same age like Shinn Asuka and Lunamaria Hawke, he doesn't hate the world and want to destroy everything like Rau Le Creuset does. However, he believes that he, as a clone, and Kira Yamato, an ultimate coordinator created through artificial means, are against the natural order and should be destroyed.

Rey is an ace pilot of ZAFT. He has excellent spatial awareness, and showed a wide range of attack variations and detailed manipulation techniques in the operation of the DRAGOON system. Able to maintain coolness in tough battles along with good situation analysis, Rey often assumes a leadership role to help keep a more hot-blooded Shinn calm while creating openings for his partner to attack. Apart from his skills as a pilot, Rey has been shown to be an adept piano player.

Rey was one of Al Da Flaga's clones, younger than Rau Le Creuset. He went with Rau to the PLANTs where he met Gilbert.

Rey was enrolled at ZAFT's military academy with Meyrin Hawke, Lunamaria Hawke and Shinn Asuka. On the day Siegel Clyne and some of his followers were executed due to Lacus's betrayal, Rey, Meyrin, Lunamaria and Shinn listened to Patrick Zala's speech about the oppression perpetuated by the Naturals against them, out of envy for their developed abilities even though it was Naturals who created Coordinators in the first place.[1]

At the Armory One base the Chairman of the Plants Gilbert Durandal was meeting the Orb Union's representative Cagalli Yula Athha, who was visiting the facility to discuss about ZAFT increasing its military power. Meanwhile, Phantom Pain forces infiltrated the base and stole ZAFT's newest mobile suits, the ZGMF-X24S Chaos Gundam, ZGMF-X88S Gaia Gundam, and ZGMF-X31S Abyss Gundam, as they heavily damaged the base during the infiltration.

Rey tried to stop the three stolen mobile suits from escaping with his white ZGMF-1001 ZAKU Phantom along with Shinn Asuka and his ZGMF-X56S Impulse Gundam. They then faced Neo Roanoke, the captain of the Earth Alliance Forces battleship Girty Lue, in his TS-MA4F Exus. During the battle, Rey showed a strange connection to Neo. The Minerva was sent into an Extendeds' facility in Lodonia, the place where Extendeds were created and trained. During this event, Rey experienced a strange and unexplained reaction.

At the Battle of Crete, his ZAKU Phantom was severely damaged while defending the Minerva from Orb mobile suits. Later, when Stella Loussier was held hostage on the Minerva, Rey helped Shinn return her to the Earth Alliance. Both were confined as punishment and could have been executed but were released on Gilbert Durandal's orders.

Later, Rey and Shinn devised a strategy to defeat the ZGMF-X10A Freedom which they successfully accomplished; but the pilot Kira Yamato survived. Afterward, Rey helped Gilbert Durandal frame Athrun Zala as a traitor, and detected Athrun's attempt to escape with Meyrin Hawke in a ZGMF-2000 GOUF Ignited. Rey accompanied Shinn in destroying the mobile suit, as his words urged Shinn to destroy it, leading to the apparent deaths of Athrun and Meyrin.

After the departure of Athrun, he became the pilot of the ZGMF-X666S Legend Gundam which was originally intended for Athrun. The mobile suit was a direct improvement of the ZGMF-X13A Providence Gundam. Both mobile suit's model numbers have unfavorable connotations: 13. Providence's model number is considered unlucky in many cultures, and 666 is the "number of the beast" ("the devil's number"). In the battle at Heaven's Base, Rey worked with Shinn in his ZGMF-X42S Destiny to form a formidable team. Rey was then awarded the order of the Nebula; he and Shinn were then appointed as members FAITH. During Operation Fury, Rey faced the ZGMF-X20A Strike Freedom Gundam piloted by Kira Yamato, while Shinn faced the ZGMF-X19A Infinite Justice Gundam piloted by Athrun. At the Battle of Daedalus, Rey devised a strategy for Lunamaria Hawke and her ZGMF-X56S Impulse to destroy the Requiem's control base, while Rey destroyed a squad of GFAS-X1 Destroy Gundam. Rey also killed Lord Djibril as he was trying to escape in the Girty Lue.

Later, Chairman Durandal unveiled "the Destiny Plan," a plan that would cause everyone to be governed by their genetic "destiny", therefore making war obsolete. Shinn hesitated, but Rey once again uses his words to convince Shinn that the "Destiny Plan" was the right thing to do. He went as far as even revealing his own origins and his "brother's", Rau Le Creuset's. He confided to Shinn that he was a clone, just like his "other self" Rau, among the several clones of the powerful and mysterious Atlantic Federation politician, Al Da Flaga. Rey mentioned that he was the "predecessor" to Kira Yamato, of sorts; the profits Ulen Hibiki made from producing these clones were used to fund research into his Ultimate Coordinator project, which ultimately produced Kira. Like Rau, he also suffered from pain that requires medication, due to the shortening of telomeres, a section on either end of strands of the DNA in his cells. This shortening was related to many of the effects of aging. Due to this, Rey knew that he did not have much of a future. However, he still passionately supported the "Destiny Plan".

In the final battle, Rey was determined to destroy Kira because he was an obstacle in the plan. Kira points out that despite Rey being a clone, his life is his own and manages to sway him away from the plan. Kira then heavily damaged the Legend. Rey then took his badly damaged Legend to the space fortress Messiah, where he found Kira and Durandal in a standoff. Moved by Kira's words, Rey shot Durandal. Due to the damage the fortress sustained at the hands of Kira's Strike Freedom, the Messiah exploded. Rey chose to remain onboard and die with Durandal and Talia Gladys, whom he called "mother" at the very last moment. 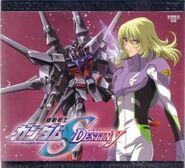 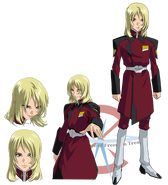 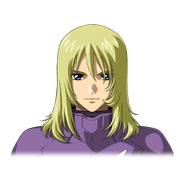 Rey getting ready to destroy the Girty Lue'(Special Edition).