The flagship of Char Aznable's Newborn Neo Zeon, it was developed based on the former Principality of Zeon's flagship, the Gwazine-class. Char commandeered his fleet from this ship and so it was installed with a living room for his use. Like the Londo Bell's Ra Cailum-class, the Rewloola-class has excellent anti-ship firepower and mobile suit deployment capabilities. The ship has two launch catapults, one above and another below its bow. Additionally, the ship has long-range cruising ability as it is equipped with twelve propellent tanks.

The Rewloola also sports two dual-barrel secondary beam guns, one in front of the bridge and another behind the ventral mobile suit catapult.

For anti-missile and anti-mobile suit defense, the Rewloola mounts twenty 3-barrel machine guns arranged in batteries of two or three on the sides of the ship. Despite their high rate of fire, experienced mobile suit pilots are still capable of evading their attacks.

The Rewloola has an unknown number of missile launchers positioned around its bridge tower and several more on other parts of the ship. The missiles launched are for anti-ship and anti-mobile suit purposes.

At the end of the Gryps Conflict, Char Aznable disappeared, and was presumed dead; however, in UC 0093 he re-emerged with a self-made declaration that he was now in command of his own Neo Zeon movement. Included with the movement were several Musaka-class cruisers and the Rewloola, Char's personal flagship.

The Rewloola saw heavy action during the Second Neo Zeon War, first coming under fire while capturing Fifth Luna and dropping it onto Earth, and then again at the Battle for Axis. The Rewloola performed exceptionally well during both battles. The ship was heavily damaged at the end of the war, but it managed to escape. It was later repaired, becoming the flagship of the Neo Zeon remnants known as the "Sleeves", and was involved in the Laplace Incident in UC 0096, till it was destroyed by the Gryps 2 Colony Laser.

Besides the Rewloola itself, another Rewloola-class ship was seen during the events portrayed in Mobile Suit Gundam in UC 0099: Moon Crisis.

With a fleet of Musaka-class cruisers 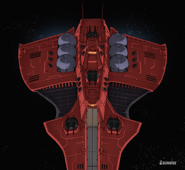