A blind priest, Malchio was trusted by both the PLANTs and Earth Alliance, thus allowing him to serve as an occasional envoy between the two. He was also closely aligned to the Junk Guild and a mentor to Prayer Reverie. He ran an orphanage in the Marshall Islands and also, with Lowe Guele's aid, brought the severely injured Kira Yamato to Lacus Clyne after Kira's near fatal battle with Athrun Zala.[1] Shortly after he returned to Earth, where Athrun paid a visit. While Malchio updated Athrun about the situation with Orb, a young boy said that someday he would destroy ZAFT and kicked Athrun in the leg. Malchio apologized to Athrun for the boy's insolence and explained that he lost his parents during the occupation of Carpentaria.[2] Sometime between the Battle of Mendel and the Battle of Boaz, Malchio negotiated a treaty between the Junk Guild and the Three Ships Alliance, allowing the Junk Guild vessel ReHOME (which aboard was none other than Lowe) to act as the tender ship of the Three Ships Alliance. After the war, Kira and Lacus moved in with Malchio and all of the orphans under his care.[3] Two years later, Reverend Malchio remained much where he was left off. When the Second Alliance-PLANT War begins, he played much the same role as he did before, negotiating between the PLANTs and Earth Alliance, while being an ally of the and Three Ships Alliance.[4] 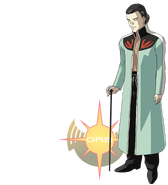 One with nature (In the Promised Land HD Remastered)