One of the two surviving members of the Gobi campaign (the other being Manning), Renchef is known to be a tough and strong leader. He is an excellent pilot but brutal in his tactics.

Not much is known about Renchef prior to his appearance in Mobile Suit Gundam: Zeonic Front. However he later joins the Midnight Fenrir Corps as one of its first members after their unit in the Gobi Desert is lost.

In Gundam Legacy, he joins the Zeon remnants plot to launch a devastating weapon. Throughout the manga, he pilots a captured GM that is modified for personal use as opposed to a Gouf or any other Zeon-made mobile suit. 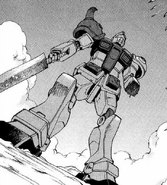 Renchef's personal GM in Gundam Legacy with a severed hand

Retrieved from "https://gundam.fandom.com/wiki/Renchef?oldid=437143"
Community content is available under CC-BY-SA unless otherwise noted.