Rena is a woman of many mysteries; all that is certain is that she is ruthless and shows no mercy towards her enemies.

Although she is a Natural, Rena possesses superb piloting abilities that are said to be above that of most coordinator's. Though unconfirmed it is suspected that she would be capable of piloting a mobile suit using a Coordinator-compatible OS.

Rena is an Lieutenant of the Earth Alliance[1]. She has the distinction of being a combat instructor as well as an ace mobile suit pilot who has piloted a GAT-01D1 Duel Dagger, GAT/A-01E2 Buster Dagger, and GAT-X133 Sword Calamity.

Initially, Rena was an instructor, teaching the five soldiers who would pilot the five Gundams. However, when all five were killed during the theft of four of those, Rena decided to take matters into her own hands, becoming a pilot herself. After her maiden battle in a mobile suit she was known by the nickname "Sakura Burst", referring to both her combat style in the Buster Dagger and to a burn scar on her right shoulder.

During the time period between the two wars, Rena was one of three ace pilots assigned to take down the traitor Edward Harrelson who was leading the United States of South America in a revolt against Atlantic Federation rule. Rena was the third pilot to engage Edward, dueling with him in a Sword Calamity mobile suit just like Edward favored. At first it appeared that she would win due to how she made use of all of the Sword Dagger's weapons and not just the melee weapons like Edward did. Rena was defeated, alive but injured. Being a chivalrous man Edward immediately went to check on her. Rena used his momentarily lowered guard to shoot Edward, intending to kill him however she only managed to wound him. Both were taken to a nearby ZAFT medical facility where they were treated and survived their injuries. 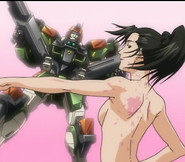 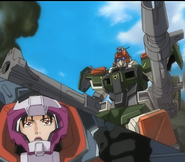