The Reinforce Junior is the Reinforce that was modified using parts from the Squid-class control ship Squid 1. These modifications include additional gun turrets, a beam shield emitter that can be used for ramming attacks, an overhauled propulsion system, and additional catapults and hangar space.

A protective device first used by the mobile suits of the U.C. 0120 era and eventually, battle ships during the Zanscare War in U.C. 0153. The Reinforce Junior is equipped with a large beam shield at the nose area in which the generator can be folded forward for ramming attack or retracted when not in use.

The main weapons of the Reinforce Junior are six 2-barrel main beam cannons. Two are on each side of the ship while the remaining two are mounted on the ventral hull of the ship. 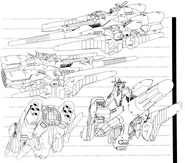