The Recten (レクテン, Rekuten?) is a mobile suit featured in the Gundam Reconguista in G anime series.

Intended for civilian purposes, the Recten is a rather basic unit that carries no weapons - quite unlike the suits used by the Capital Army. To circumvent this, Capital Guardsmen are taught to use its tools as improvised weapons. The faceplate is a screen and can display several forms of status information, giving the appearance of facial expressions. It also has a pair of cameras on its cheek which can detach and be controlled from a distance via wire.

A handheld tool used for construction, while not designed for battle, the welder can act as a makeshift beam rifle.

A weapon borrowed from the GH-001 Grimoire, it can either fire physical bullets or beams based on the type of magazine equipped.

A pair of large manipulators, with one equipped with a welder called the "Power Weld" and the other with a pincer. While these manipulators are not designed for battle, the welder can play the role of a beam rifle, and pincer can be used for grappling.

Rectens were originally used by the Capital Guard for civilian purposes, namely law enforcement. A particular incident was when the Pirate Corps attacked the Capital Tower while Rectens were being boarded by the students of the 1010th class of cadets training in the Capital Guard. Bellri Zenam, the youngest of the cadets, and the first to launch managed to take on the YG-111 Gundam G-Self piloted by Aida Rayhunton with the assistance of Captain Samatar who was piloting a orange variant of the Recten.[1]

In response to the number of pirate attacks against the Space Elevator, as well as growing tensions between the nations of Ameria and Gondwan, several Rectens were modified into more combat oriented Recksnows and deployed in defense of the Capital. 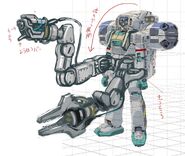 Recten as seen on Gundam Reconguista in G (manga)

Retrieved from "https://gundam.fandom.com/wiki/Recten?oldid=476498"
Community content is available under CC-BY-SA unless otherwise noted.