Apart from attempts to take down the "Legged Ship" (ZAFT's codename for the Archangel), he shares a strange connection with Earth Alliance mobile armor pilot Mu La Flaga and the two are shown to have a rivalry of sorts throughout the war.

Le Creuset appears at first glance to be a calculating strategist, capable of predicting many of his opponents' moves. He also treats the members of his team with a reasonable amount of dignity and respect and can be charismatic to persuade people for his own ends, however below this calm exterior lies the persona of a nihilistic omnicidal maniac. When confronting his enemies directly Le Creuset's true colors are revealed, he believes that he's the only one with the right to judge both Naturals and Coordinators and has a deep hatred for both. He also becomes severely unstable and unpredictable without his medication.

Le Creuset is a skilled pilot, capable of piloting a number of suits with ease. Like Mu La Flaga, he has high spatial awareness and thus capable of controlling multiple remote guided weaponry. He is also skilled with firearms and tactics, capable of seeing through feints and decoys to determine the enemy's true plan. Le Creuset is also charismatic and doesn't hesitate to use that fact when it suits him. In the Providence, he is able to fight Kira Yamato very well, dominating most of the fight with his use of the DRAGOON System.

Already a ranking officer within ZAFT at the time, Rau Le Creuset was assigned the then-still-experimental ZGMF-1017M GINN High Maneuver Type. The machine had yet to be formally test-flown, and this would be its first sortie. Launching shortly before the end of the Battle at the Endymion Crater, Rau in the GINN is engaged by Mu La Flaga's TS-MA2mod.00 Moebius Zero, the two fighting an intense duel that is prematurely ended by the detonation of a Cyclops System that destroys the Alliance base, ending the battle and destroying most of the remaining forces on both sides. Shortly thereafter, he was assigned command of the Nazca-class destroyer Vesalius. This encounter on the battlefield would mark the beginning of a rivalry between the two soldiers.[6]

Despite his allegiance with ZAFT, Rau bears no loyalty to it, or anyone, for that matter. Rau's true aim is to put an end to humanity and what he sees as a 'world of endless desires'. He believes he can accomplish this through the nuclear arsenal of the Earth Forces and GENESIS, ZAFT's super weapon. Furthermore, he believes he is the person best suited to carry out the judgment and execution of humanity. Rau seemingly does not value human life in the slightest—not even his own. His intentions almost come to fruition at the Battle of Jachin Due, but they are thwarted by Kira Yamato and the crew of the Archangel.

His reputation is high enough that the ZAFT National Defense Committee Chairman, Patrick Zala, reveals to him the real plans for Operation Spitbreak. Le Creuset passes this information to the Atlantic Federation, then betrays Zala again by handing over confidential information regarding the nuclear technology behind the two Gundams, Freedom and Justice. This information is given to the Blue Cosmos Chairman, Muruta Azrael, who is also the director of the Azrael Conglomerate, the Earth Alliance's primary arms supplier and uses this information to use nuclear weapons again.

Neither Zala, members of the Supreme Council, nor ZAFT suspected Le Creuset of treason. Although Rau supposedly answers to Patrick Zala, it becomes quite clear that he is actually manipulating Chairman Zala.

A chance encounter with Mu La Flaga and Kira Yamato in the abandoned colony of Mendel reveals his true identity and motives. His birth name is Rau La Flaga,[3] the direct clone of Mu La Flaga's father, Al Da Flaga, modified as a Coordinator.

Considering his own son Mu as "nothing" because he was "diluted" by the inferior DNA of a mother, Al Da Flaga, a powerful and wealthy Atlantic Federation politician, conspired with Professor Ulen Hibiki to create clones of himself, of which Rau would be the first, and his heir, superior in every way to his brother, Mu, who was to be disinherited. Despite the fact that Coordinators had existed for quite some time, direct human cloning was illegal, but Al believed his wealth and influence put him above the law, and Dr. Hibiki agreed to this transaction in exchange for the funds to finance his Ultimate Coordinator project.

Eventually, Al Da Flaga took the young Rau home and decided to educate him strictly. It was during this period that the young Mu and Rau briefly met for the first time. However, Al Da Flaga later discovered that Rau shared the same telomere length as him, meaning Rau's lifespan was the same as his own remaining lifespan. As such, Flaga deemed Rau a failure as his successor and abandoned him. Angered, Rau burned down the Flaga family mansion, killing Mu's parents. With no past and no future, Rau was filled with a deep hatred towards humanity as a whole, both Naturals and Coordinators.

Rau donned a mask to conceal his resemblance to Al Da Flaga and adopted the persona of "Rau Le Creuset" ("le creuset" being French for "The Crucible"). He travelled to the PLANT and joined the Zodiac Alliance, which eventually became ZAFT. Pretending to be a Coordinator, his skills and abilities allowed him to rise through the ranks. During this time, he became acquainted with geneticist Gilbert Durandal, who provided him with drugs to alleviate his rapid aging, and took Rey Za Burrel, another clone of Al Da Flaga, under his wing.

Rau believes, that all people are selfish creatures who will do anything to "get ahead." He justifies this point of view by his very existence; he is the direct result of human hubris - cloning. While he believes, that humanity will eventually wipe itself out, he is not satisfied with waiting for that to happen on its own and works towards making that end a reality.

To help this plan, he establishes a relationship with Muruta Azrael, the leader of Blue Cosmos. He also maintains a good relationship with Patrick Zala the radical leader of the Coordinators. Then he leaks information he obtained through Patrick to the Earth Alliance through Muruta Azrael about the N-jammer canceller technology used to create the ZGMF-X10A Freedom and ZGMF-X09A Justice through a disc he entrusts to Flay Allster, who he captures during the Battle of JOSH-A. This eventually leads to the use of nuclear missiles by the Earth Alliance and the eventual destruction of the ZAFT military asteroid Boaz and ZAFT counters with the GENESIS superweapon.

Second battle of Jachin Due

In the final battle of the war, Rau pilots the ZGMF-X13A Providence, the final ZAFT Gundam. Rau cripples the Strike and the Buster and destroys an escape shuttle launched from the Dominion that contains Flay Allster. He then battles with Kira Yamato in the ZGMF-X10A Freedom.

Rau damages the Freedom using the DRAGOON System installed in the Providence and yells out his beliefs of humanity's self-destructive nature. Rau then began to laugh maniacally, declaring that he had already won; the fortress Jachin Due was due to self-destruct, thereby triggering GENESIS to fire at Earth, forcing an escalation that would eventually wipe out humanity. However, Kira declared that the world is still worth protecting and attacked the Providence with a double-bladed beam saber, hacking off its remaining arm. Rau desperately used his remaining DRAGOONs to defend himself, but Kira/Freedom absorbed the damage, ultimately impaling Providence, penetrating the cockpit and wounding Rau. As he drew his last breath, Rau smiled as his visor shattered and his mask came off. Meanwhile, Athrun detonates the Justice's reactor within GENESIS, foiling Rau's plan, but not before the superweapon fires one last beam that destroys the Providence.

Although Rau dies at the end of Gundam SEED, he appears in flashbacks in Mobile Suit Gundam SEED Destiny. Kira is still haunted by his memories of him, and tries to ensure that no one like Rau threatens mankind's future again.

In Episode 29, Gilbert Durandal, Rau's former friend and doctor, imagines conversing and playing a metaphysical game of chess with Le Creuset. Le Creuset asks Durandal why he feels humanity is worth saving, and pities him for believing that anything other than disappointment, reminding Durandal of his own failure to save him. Durandal swears that he will do anything to ensure the continued survival of humanity, no matter what the cost of that might be.

Later on during the series finale, Rey Za Burrel, a fellow clone, decides to take on the name of Rau during his battle with Kira. As Rey battles Kira, he blames Kira for all the faults that humanity has caused, including being ignorant and arrogant towards both Rau and himself, and thus he wishes to finish the job that Rau has started, which means total annihilation and reformation. However, Kira refutes and counterpoints that Rey is his own person, and his life and fate should belong to himself and not anyone else, because everyone has got only one life to live out. After Kira critically damages Rey's Legend Gundam, Rey goes back to the Messiah, where he witnesses the heated and tense confrontation between Kira and Gilbert. As Rey finally realizes that Gilbert has been manipulating him right from the start, he mortally shoots Gilbert, in his ultimate release and redemption with pain and tears, and realizes that he must go on with his own life. He later hugs Talia Gladys, whom he sees as his surrogate mother, and join her and Gilbert in death, aboard the exploding Messiah, as it crashes upon the lunar surface.

Rau after he was cloned

Rau as a child

Rau in his pilot suit

Rau nearly gets stabbed by the Freedom's beam saber 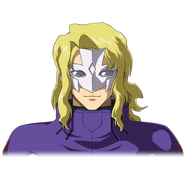 Retrieved from "https://gundam.fandom.com/wiki/Rau_Le_Creuset?oldid=455165"
Community content is available under CC-BY-SA unless otherwise noted.