Though he isn't a Newtype he's still able to keep up with Mark Guilder and even outperforms Ellis Claude when it comes to melee combat. However, even without being a Newtype he's still a formidable opponent and complimented Ellis Claude's balanced approach upon the battlefield when she still piloted the Tornado Gundam. However, when she moved on to the GGS-000 Phoenix Zero he remained in the Tornado Gundam despite it being vastly outperformed by the more powerful foes they've continued to encounter. It is a testament to his skill that despite such handicaps he's still performing in battle alongside Mark Guilder and Ellis Claude.

Ranaleau Shade is a member of Mark Guilder's squad alongside Ellis Claude whom is his partner and serves as an MS Pilot for the Carry Base. Both pilot one of the Tornado Gundam's and worked quite well when fighting together despite their conflicting personalities. However, Ellis Claude would later receive the GGS-000 Phoenix Zero from Mark Guilder when he moved on to the GGF-001 Phoenix Gundam while Ranaleau Shade was stuck with the outdated and outperformed Tornado Gundam. At around this time Kay Nimrod inherits the Tornado Gundam from Ellis Claude and Ranaleau Shade ends up forming a close friendship with her upon the battlefield. Due to the Tornado Gundam's being outmatched the two formulated a basic combination attack together and tend to watch each other's backs upon the battlefield. 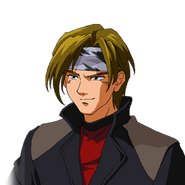 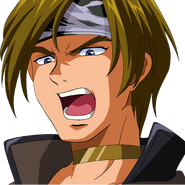 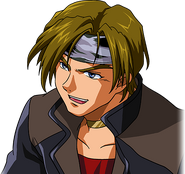 Retrieved from "https://gundam.fandom.com/wiki/Ranaleau_Shade?oldid=467342"
Community content is available under CC-BY-SA unless otherwise noted.