Ramuiko Stein (ラムイコ・シュタイン, Ramuiko Shutain?) is the pilot of the MS-19 Dolmel and the final boss from the arcade game Mobile Suit Gundam: EX Revue. Her identity and face are hidden until the player defeats her.

A Zeon pilot who claims to have been born and raised in A Baoa Qu. In December of UC 0079, Ramuiko Stein served as the final line of defense for A Baoa Qu from the RX-78-2 Gundam, piloted by Amuro Ray. Amuro's Newtype skills would prove superior, and after her defeat the Dolmel was destroyed in an explosion, killing Stein in the process. 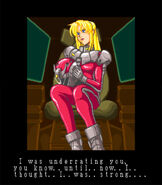