Rain is a kind yet clever and tough young woman who became Domon's closest ally and supporter. She's a brilliant mechanic and doctor. Though Rain had to put up with Domon's tough and hot-headed attitude, she still remained loyal and faithful to him. She was the one who took the photo of Domon and his family, which was later torn and used by him during his search for his brother Kyoji.

A compassionate and empathetic person, Rain never turns her back on those in need and always helps others. Such as Chibodee's crew when they get caught in the middle of an overflowing river and tends to their wounds, despite the fact that they stole Shining Gundam's combat data, showing that she never holds a grudge. Rain is also sympathetic towards those with unfortunate circumstances, especially Domon, openly crying at the fact that he has to fight and kill his own brother.

In addition to being a qualified doctor, she is also a talented woman who is capable of mechanic maintenance, espionage, and even piloting a Gundam. For self-defense, she carries a pistol, a compact with various functions such as a barrier, a communicator, and a flashlight, and her earring emits a light that paralyzes opponents. She is a good shot, and has even shot down an opponent's gun from a distance.

Although initially studying to become a doctor, due to her father's orders, Rain returned to Neo Japan, joining Domon Kasshu as the mechanic of his GF13-017NJ Shining Gundam. Rain remained with Domon until she is injured while piloting the Shining Gundam in the Guiana Highlands. Domon placed her on a Neo Russian transport and had her go to Neo Hong Kong while he fought Master Asia and the JDG-00X Devil Gundam.

During the 13th Gundam Fight finals, Rain continued to serve as Domon's mechanic until she left him following an argument. Rain then left, and shortly after meeting with Schwarz Bruder, temporarily defected to Neo Germany, before eventually returning to Domon when he realized that he couldn't continue without her.

After Schwarz is injured and his relationship to Kyoji Kasshu revealed, Rain snuck into the hospital and heard the truth about the Devil Gundam's theft and how her father had helped orchestrate a plot along with Major Ulube Ishikawa to ruin Dr. Raizo Kasshu's reputation. She helped Schwarz escape and get to Lantau Island. Later she piloted the JMF1336R Rising Gundam and fought the Walter Gundam that was being piloted by an infected Allenby Beardsley. Eventually, Rain managed to free Allenby from the DG cells and took her to a hospital. Afterwards, the Neo Japan military came to retrieve Dr. Mikamura. Now knowing the truth about the Devil Gundam incident, she felt responsible, believing her father's crimes to also be her crimes.

Sensing Rain was in danger, Domon began to search for Rain's whereabouts. However he was too late and witnessed the colony be completely absorbed by the Devil Gundam. Before dying, Dr. Mikamura released Dr. Kasshu and pleaded for Domon to rescue his daughter, with Dr. Kasshu later telling Domon of Rain's location. After defeating Ulube alongside with the Shuffle Alliance, Domon entered the center of the colony to rescue Rain, and engaged in a final confrontation with the Devil Gundam, only to realize that Rain was the Core Life Unit.

Domon attempted to free Rain with brute force, but Dr. Kasshu explained that Rain's attacks would become stronger the closer that he moved towards her, as Rain wanted to stay away from him due to her guilt associated her father. Additionally, any damage sustained by the Devil Gundam caused Rain immense pain. Allenby then suggests Domon convey his feelings to Rain and declare his love for her. By doing so, Rain breaks free from the Devil Gundam's controls, embracing with Domon and delivering the final blow to the Devil Gundam with the Bakunetsu God Sekiha Love Love Tenkyoken technique. After the Devil Gundam is destroyed, she returns to Earth with Domon.

Rain, as she appears in the anime.

Rain as a member of Neo Germany.

Ulube offering Rain as the new Core Life Unit to the Devil Gundam.

The Devil Gundam beings to assimilate Rain, turning her into the new Core Life Unit.

Rain, as a Core Life Unit, is put at the center of the colony.

Domon ceases his God Finger attack after realizing Rain is in the Devil Gundam.

Rain inside the cockpit of the Devil Gundam. 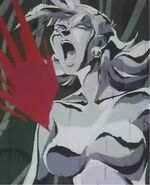 Rain sheds a tear after Domon tells her that her father has died.

Rain flies to Domon from the Devil Gundam. 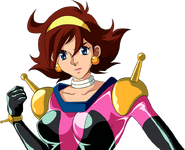