The Ra-Cailum-class battleship (sometimes spelled Lar Kairum, both pronounced Rock-eye-loom) was the last battleship line commissioned by the Earth Federation. It was first featured in the movie Mobile Suit Gundam: Char's Counterattack.

A high-performance ship that has both sufficient mobile suit operation capability and high bombardment capability. The class has five two-barrel main beam turrets, twenty-two anti-aircraft guns, and six missile launchers. It also has eight engines and a pair of cooling fins to help improve fuel consumption and increase speed. It has two bridges, a regular bridge and a battle bridge that also serves as an escape pod. It has a catapult for launching mobile suits on each side of the ship, and a deck for landing at the rear. In the U.C. 150's, modernization and upgrades such as equipping the bow with a beam shield have been carried out. There is one refit known to exist, the Admiral Tianem. While there aren't any specifics on the changes to the ship, a few notable differences included the launch catapults mounted sideways, the removal of a twin mega particle gun and several anti-aircraft guns, and a few changes in the hull.

The main weapons of the Ra Cailum-class are five 2-barrel mega-particle guns situated on the dorsal and ventral hulls with three situated forward of the bridge, one to the bridge's aft and one on the underside of the rear landing deck. These guns provide full covering fire from all directions, ensuring the ship remains protected from threats on all approaches.

For anti-air/anti-mobile suit defense, the Ra Cailum-class is equipped with twenty two 2-barrel defensive guns. The guns are placed on various locations on the hull to ensure the ship is defended from mobile suits and aircraft no matter which direction attacks may come from.

The Ra Cailum-class is equipped with six missile launchers in the bow which, depending on the ordnance loaded, can be used for anti-ship or anti-mobile suit combat.

A protective device first used by the mobile suits of the U.C. 0120 era and eventually, battle ships during the Zanscare War in U.C. 0153.

The first Ra Cailum class ship debuted in the movie Char's Counterattack. Set in U.C. 0093, the Ra Cailum was introduced as the flagship of the Londo Bell task force. The Ra Cailum was commanded by Captain Noa, and played a major role in the Second Neo Zeon War, by first rescuing a disable civilian shuttle, then later launching an impressive nuclear barrage against the asteroid Axis, and lastly by deploying a team of mini mobile suits to infiltrate and destroy Axis from the inside.

In U.C. 0096, during the Third Neo Zeon War, the Ra Cailum responded to an assault on Dakar by the Zeon Remnants and launched the Tri-Stars to intercept. However, the attack was merely a diversion to distract the Federation from locating the Garencieres in the desert. Later, the Ra Cailum gained a new addition to the crew: Riddhe Marcenas and his MSN-001A1 Delta Plus before moving to intercept a Zeon attack at Torrington.

In U.C. 0123, after the Crossbone Vanguard captured and occupied Frontier IV, one Ra Cailum-class ship, the Ra Gustar, led a force to attack the enemy headquarters. The captain of the ship order the guns to fire through the colony's exterior in an attempt to destroy the buildings where the Crossbone Vanguard's leadership resided, ignoring the possible deaths of refugees camping nearby. However, the attack failed as the Crossbone Vanguard's leadership escaped relatively unharmed. Another Ra Cailum-class ship was also seen as the flagship of the Federation's reinforcements sent from the Moon. This ship and the rest of the fleet were quickly sunk by XMA-01 Rafflesia.

Another Ra Cailum-class ship Ajax belong to the 306th Corp, it was sunk during field test of RX-99 Neo Gundam at Zebra Zone.

Several decades later, during the League Militaire's struggle against the Zanscare Empire, the League Militaire used a Ra Calium Class ship named Jeanne D'Arc, which was under the command of Admiral Mubarak Stern. Interestingly, the Jeanne D'arc, despite being over 50 years old and considered an obsolete design, was fitted with a beam shield, which reduced the damage done by an enemy mobile suit's beam weaponry. With Admiral Mubarak Stern at the helm, he launched a suicide attack on the Zanscare Fleet, however, this ship was destroyed by Chronicle Asher piloting the Rig Contio.

There was only one major Ra Cailum-class refit program, in which at least one ship, Admiral Tianem, was refit. However, specifications on this refit type were not immediately available. It was known to carry and test the Gundam F90 . 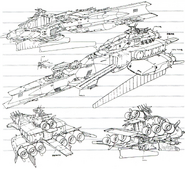 Rear view of a Ra Cailum-class