The Ra Cailum was a battleship and the lead ship of the eponymous class commissioned by the Earth Federation Force.

A high-performance ship that has both sufficient mobile suit operation capability and high bombardment capability. The ship is armed with five two-barrel main beam cannons, twenty-two secondary anti-aircraft guns, and six missile launchers. It also has eight engines and a pair of cooling fins to help improve fuel consumption and increase speed. It has two bridges, a regular bridge and a battle bridge that also serves as an escape pod. There is a catapult for launching mobile suits on each side of the ship, and a landing deck at the rear. The Ra Cailum also possesses the ability to deploy multiple decoy balloons that expand to the same size and shape as the ship itself. Although a close visual inspection would reveal which "ship" is real or fake, they were useful for fooling long-range inspection and sensors thanks to Minovsky particle interference.

The main weapons of the Ra Cailum-class are five 2-barrel mega-particle guns situated on the dorsal and ventral hulls with three situated forward of the bridge, one to the bridge's aft and one on the underside of the rear landing deck. These guns provide full covering fire from all directions, ensuring the ship remains protected from threats on all approaches.

For anti-air/anti-mobile suit defense, the Ra Cailum-class is equipped with twenty two 2-barrel defensive guns. The guns are placed on various locations on the hull to ensure the ship is defended from mobile suits and aircraft no matter which direction attacks may come from.

The Ra Cailum-class is equipped with six missile launchers in its bow which, depending on the ordnance loaded, can be used for anti-ship or anti-mobile suit combat.

A 6-tube missile launcher is mounted on both sides of the ship, near the end of the catapults.

Two 2-tube missiles launchers are mounted on the lower decks on either sides of the ship.

A lift-generating system in use since the One Year War, it allows a vehicle to resist the pull of Earth's gravity. It is not installed on a standard mobile suit due to its power requirements and size. When Minovsky particles are released into the air, the positive and negative particles spontaneously align themselves into a three-dimensional cubic lattice. Because of the repulsive and electrostatic forces between the particles, this lattice resists compression, and the Minovsky Craft System uses this phenomenon to push the underside of the vessel away from the planet's surface. This allows the equipped vehicle to float over Earth's surface. In U.C.0096, the Ra Cailum is installed with a new type of Minovsky Craft System and descended to Earth for functional testing.

The ship can launch decoy balloons shaped like asteroids, Ra Cailum itself, etc, to confuse the enemy.

The conclusion of the Federation's civil war and the defeat of the Titans had brought the colonial space separatist movement to a virtual fever pitch, and when the First Neo Zeon War ended, it was decided that a new organization should be created to inspect the colonies for left-over dissents and revolutionaries. The new counter-insurgency force created for this job was called Londo Bell, and unlike the elitist Titans, the personnel were largely recruited from AEUG and Karaba and thus were much more humane in their inspections. This task force was first to receive the new Clop-class cruisers and they also received the first battleship of the new class, the Ra Cailum. The Ra Cailum was adopted as the flagship of the Londo Bell and is placed under the command of Captain Bright Noa, the Argama's former captain and Londo Bell's commanding officer. The Ra Cailum also served as ace pilot Amuro Ray's personal base of operation when he joined Londo Bell.

On 3 March U.C. 0093, the Ra Cailum responded to a new Neo Zeon movement under the command of Char Aznable. In company with three Clop-class cruisers, the Ra Cailum raced to the scene and the Second Neo Zeon War began in earnest with the battle for Fifth Luna. Although the ship and its mobile suits fought valiantly, they failed to stop the drop of Fifth Luna, which made land-fall on Lhasa, Tibet, then-location of Federation headquarters. Although damaged by the battle, Bright Noa ordered Ra Cailum to superimpose herself between the Neo Zeon forces and a disabled passenger shuttle that had wandered into the combat zone. When the battle died down, the shuttle captain and his passengers abandoned the disabled shuttle and were taken aboard the Ra Cailum as refugees; among those on the shuttle were Bright Noa's son Hathaway, Vice-Foreign Minister of the Earth Federation Adenaur Paraya, and his rebellious daughter Quess. Once aboard, Adenauer Paraya ordered Captain Noa to take the Ra Cailum to the space colony Londenion located at Side 1, for the purpose of seeking contact with Neo Zeon leadership with the eventual intention of seeking a settlement to the war.

The Ra Cailum arrived at Side 1 shortly thereafter and docked at the colony's spaceport. Here the civilians from the shuttle disembarked, and the ship's officers and crew enjoyed a brief shore leave while dockworkers hustled to get the battleship repaired, refueled, and restocked with supplies for its next operation. In particular, Ra Cailum 's bow had been blown off and had to be reconstructed from scratch. Meanwhile, the negotiations between the Federation and the Neo Zeon reach a conclusion: The Neo Zeon would surrender all of their warships at Luna II in exchange for the asteroid Axis, which they purchased from the Federation with gold bullions. This seemed suspicious to Cameron Bloom, the ex-fiancé of Bright Noa's wife Mirai and one of the Federation officials, and he informed Bright of Char's purchase. As Cameron had feared, Neo Zeon had no intention of fulfilling their end of the bargain and had sent a decoy fleet to Luna II. Bright and Amuro soon figured out the truth, and with help from Cameron, they acquired 15 nuclear warheads. Armed with the nuclear warheads, Ra Cailum and her task force set sail from Londenion on 12 March U.C. 0093 to Luna II. By the time they arrived, the forces at Luna II had been defeated. Elsewhere, Neo Zeon's actual fleet successfully seized control of Axis. Bright Noa then ordered Ra Cailum to speed for Axis, but the Londo Bell forces arrived too late to stop the reactivation of the asteriod's nuclear engines.

As soon as Londo Bell was within range of Axis, the task force opened fire on the asteroid, and a massive battle for control of Axis erupted. Bright Noa opted for the use of the nuclear missiles, but Ra Cailum's attempt to destroy the asteroid with the nuclear missiles failed. With time running out, the battle subsided as Londo Bell's senior officers and mobile suit pilots reconvened aboard Ra Cailum to prepare for one last ditch effort. Their plan called for the destruction of Axis' thrusters, which would cause the asteroid to miss earth entirely, but if that failed then Ra Cailum would have to close in and launch mini-mobile suits (MMS) to infiltrate Axis and plant powerful explosives. The resulting explosion would split the asteroid in two, causing it to miss earth entirely. Wasting no time Ra Cailum's mobile suit squad re-launched.

The attempt to destroy the thrusters on Axis failed, so Ra Cailum closed in on the asteroid to allow a number of MMSs to land on the Axis and plant high nuclear explosives, as per the plan. Despite murderous losses incurred by the Londo Bell forces, the MMS unit succeeded in placing the explosives, and the resulting blast split Axis into two pieces, the latter of which was decelerated and still headed for earth. Amuro Ray, through the use of his RX-93 ν Gundam, prevented the last piece from colliding with earth, thus bringing the battle for Axis to a close.

Despite being damaged heavily during the Second Neo Zeon War, Federation spent a huge amount of money repairing and refitting the ship. By the time of the outset of the Third Neo Zeon War in U.C. 0096, the Ra Cailum had been transferred to Earth for testing of a new Minovsky Craft System. During the time of the refit, the ship was equipped with a new team of mobile suits which included three RGM-96X Jestas and a RGZ-91 Re-GZ. The Ra Cailum's "Tri-Star" Jesta team was involved in the defense of the Earth Federation at Dakar while the ship was undergoing trials off the coast. After the attack on Dakar, the Ra Cailum was reassigned to the South Pacific area at the request of Federation Council member Ronan Marcenas. During this transfer, Ensign Riddhe Marcenas, along with his MSN-001A1 Delta Plus, was transferred aboard the Ra Cailum to support the ship's mobile suit complement.

Shortly after departing the Marcenas Manor, Captain Bright was notified of the attack on the Torrington Base in Australia. Heading there to observe and assist, Captain Bright orders the Ra Cailum into the area and launches the Jesta team and Delta Plus in support of the Federation Forces stationed in the area. All of the crew later bear witness to the RX-0 Unicorn Gundam transform into Destroy Mode. As soon as the AMA-X7 Shamblo is destroyed, Bright ordered Riddhe to secure the Unicorn. But before he could take action, the Vist Foundation deployed the RX-0 Unicorn Gundam 02 Banshee, which captured the Unicorn and all three suits were brought to the Ra Cailum.

The crew became antsy with the Foundation occupying their ship. Soon, the Foundation arranged for the Unicorn to be brought to the Garuda, with the Banshee, Tri-Stars and Riddhe/Delta Plus to escort it. In transit, Sleeves transport ship Garencieres appeared and launched a sneak attack against the Garuda. The Ra Cailum attempted to go on alert but second-in command Meran stopped them, reminding that their mission is to escort the Unicorn to the Garuda. The Ra Cailum later went into space in pursuit of the Neo Zeon remnants. After Captain Bright was informed that the Gryps II Colony Laser was being restarted, he ordered the Ra Cailum's descent to Earth and the ship later appeared over North America's Cheyenne base, where the laser's control center was located. The Ra Cailum's mobile suit team then confronted the base's mobile suits and got them to stand down so that Bright could conduct a search of the base. However, despite his best efforts, Bright could not stop the firing of the Gryps II Colony Laser.

Bridge, with Bright Noa seating in the center

Rear as seen from the cockpit of Delta Plus

Flying off the coast of Dakar

A Jesta on a Base Jabber launching from Ra Cailum

With Jestas in Vol. 6 of Gundam Unicorn Novel 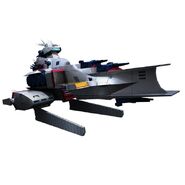 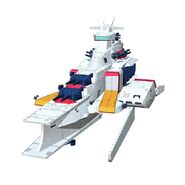