The RXF-91 Silhouette Gundam is a mobile suit that appears in the manga/model kit series Mobile Suit Gundam Silhouette Formula 91 in UC 0123.

The RXF-91 Silhouette Gundam is an advanced mobile suit that is based on stolen data from the Strategic Naval Research Institute's Formula Project. As a result, the RXF-91 Silhouette Gundam is in many ways identical to the F91 Gundam F91 that SNRI was still developing. However, several notable changes have been made. The Gundam F91's multi-layered armor, face heat vents, and spare beam shield were removed, while the shoulder radiator fins were replaced by tubular heat vents.

The Silhouette Gundam is equipped with a pair of head mounted Vulcan guns to serve as a mid-close range defensive weapon. While they do little damage against the armor of a mobile suit, they are useful for shoot down incoming missiles, small attack vehicles, or to deter closing in enemy machines.

The beam saber is the standard close-combat weapon of most mobile suits, it emits a blade of plasma contained by an I-field that can cut through any physical armor that have not been treated to resist it. The beam saber is powered by a rechargeable energy capacitor, and the Silhouette has two beam sabers stored on the backpack.

The Silhouette Gundam is equipped with a pair of fire-linked mega machine cannons in its upper chest, and they are more powerful than the vulcan guns.

The most powerful weapon employed by the Silhouette Gundam, the Variable Speed Beam Rifles, or VSBRs for short, are mounted on the suit's back and powered directly by its reactor. The VSBRs can fire either low-speed beams with high destructive power, or high-speed beams with high penetrating power, sufficient to destroy two MS with one shot or pierce a beam shield. The VSBRs typically slide under the shoulder when deployed.

Mounted on the Silhouette's right forearm, the beam spray gun had a shorter range than standard beam rifles, but it could still destroy an MS in one shot and was just as accurate and had a higher rate of fire.

The Silhouette Gundam can be equipped with a beam shield generator mounted on the left forearm. Unlike an I-field generator, which is effective only against beam attacks, the beam shield blocks both beam and projectile weapons. The beam shield generates a plane of energy similar to the blade of a beam saber. This plane is divided into multiple sections, which can be turned on or off as needed to conserve energy. Individual sections are also automatically deactivated whenever they're in danger of coming into contact with the mobile suit itself. The Silhouette's beam shield generator is noticeably larger than many contemporaries. In many ways it is a smaller version of standard physical shield that mounts the equipment to emit beam shield sections.

The Silhouette Gundam is a mobile suit built by Anaheim Electronics as part of the Silhouette Formula Project, launched in UC 0112 and based on stolen plans and technical data of the F90V Gundam F90 VSBR Type, in an attempt to catch-up to the Earth Federation Forces' Strategic Naval Research Institute's advancements in mobile suit technology.

The RXF-91 Silhouette Gundam was piloted by test pilot Tokio Randall and was stored aboard the Anaheim Electronics owned ship Bladewood, a freighter that had been refitted with a mobile suit deck, launch catapult, and a dual barrel beam turret, along with the RGM-111 Hardygun and F71B G-Cannon Magna. The mobile suits were taken to the Zebra Zone of Side 3, an area believed to be uninhabited, where tests were conducted to measure the performance of the three mobile suits. The tests began in November of UC 0122. By February the tests were entering their final stages, but during a mock battle between the Silhouette Gundam and the Hardygun, the two mobile suits encountered a Den'an Zon from the Crossbone Vanguard's Dark Tiger Squadron, who were also conducting tests. Tokio in the Silhouette Gundam drove off the Den'an Zon.

Because the Crossbone Vanguard was not ready to reveal itself, the Dark Tiger Squadron launched an attack against the Bladewood. Tokio launched in the Silhouette Gundam and engaged against two enemy mobile suits. During the attack Tokio released the Gundam's limiter and fought with its full potential, quickly destroying his targets before moving to aid his comrades.

Several days later, the damaged Bladewood took refuge in an officially abandoned colony to undergo repairs by the crew of the Earth Federation Forces Ra Cailum-class Ajax. The head mobile suit engineer - Iris Orlando - was brought aboard the Ajax to transfer the combat data from the RXF-91 Silhouette Gundam to the RX-99 Neo Gundam Unit 2 and adjust the new Gundam's controls.

Shortly after, Tokio was piloting the Silhouette Gundam along with Kevin in the Hardygun in the colonies interior, returning from a meeting from the community with the Colony's refugees. On the way back to the Bladewood the mobile suits were intercepted by Earth Federation Jegans that ordered Tokio to rendezvous with the Ajax.

Because of the Ajax's Captain and mission, Tokio and Iris sought to escape, and assist several other Anaheim technicians in escaping as well. Tokio and Iris boarded the Neo Gundam Unit 2 while Layla Lagiorr, who was riding in the Hardygun as it busted through the Ajax's hull, boarded the Silhouette Gundam after she saw that it was abandoned, despite having only piloted a thirty-year old AMS-119 Geara Doga before.

After activating the Silhouette Gundam, Layla saw the ship's captain Baz Galemson through the window to the ship's pilot ready room, and recognized him as the man who massacred her people six years ago. She used the Silhouette to smash the window with the machine's fist but was stopped from further action by Tokio and Kevin, who convinced her that it was more important to escape the Ajax.

Out in space the three mobile suits were intercepted by Galemson in the Neo Gundam Unit 1, with whom Layla immediately engaged in melee combat. The battle was interrupted by Shelf Sheffield in the XM-07G Vigna Zirah, at which point Layla and the Silhouette escaped into the colony's interior with the people from Anaheim. In the interior they were again intercepted by Galemson. This time Layla engaged him with the aid of Tokio in Unit 2. Tokio used Unit 2 to grab Unit 1 in a submission hold to keep it from moving, and then escaped in the core fighter. Layla used the Silhouette's beam sabers while Tokio used the core fighter's beam guns in a combined attack against Unit 1 that destroyed the mobile suit.

The suit was later upgraded into the RXF-91A Silhouette Gundam Kai. 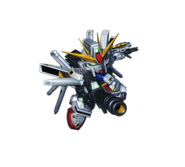 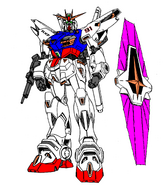