The RXF-91A Silhouette Gundam Kai is a mobile suit that appears in the manga/model kit series Mobile Suit Gundam Silhouette Formula 91 in UC 0123.

After Tokio Randall and his RXF-91 Silhouette Gundam broke through the Crossbone Vanguard's siege in the Zebra Zone, the Silhouette Gundam's wreckage was returned to Anaheim Electronics and subsequently refurbished as the RXF-91A Silhouette Gundam Kai. It featured reinforced armor throughout the chest, cockpit hatch, and near the intakes. Additionally, it has improved main generator output and is retrofitted with a new model VSBR.

The Silhouette Gundam Kai is equipped with a pair of head mounted Vulcan guns to serve as a mid-close range defensive weapon. While they do little damage against the armor of a mobile suit, they are useful for shoot down incoming missiles, small attack vehicles, or to deter closing in enemy machines.

The Silhouette Gundam Kai is equipped with a pair of fire-linked mega machine cannons in its upper chest, and they are more powerful than the vulcan guns.

The standard close-combat melee weapon of most MS, beam sabers are powerful weapons that emit a blade of plasma contained by an I-field that can cut through any physical armor without anti-beam coating. The Silhouette Gundam Kai is equipped with two beam sabers stored on the backpack.

The most powerful weapon of the Silhouette Gundam Kai Type is a pair of Variable Speed Beam Rifle (abbr. VSBR) on its backpack, and powered by the suit's reactor. The VSBRs can fire either low-speed beams with high destructive power, or high-speed beams with high penetrating power, sufficient to destroy two MS with one shot or pierce a beam shield. The VSBRs typically slide under the shoulder when deployed.

Mounted on the left forearm of the Silhouette Gundam Kai is a beam shield generator. Unlike an I-field generator, which is effective only against beam attacks, the beam shield can block both beam and projectile weapons.

The beam rifle is the standard ranged weapon of many mobile suits, it fires a compressed mega particle beam which can penetrate any physical armor, leading to the saying that any mobile suit equipped with a beam rifle had the power of a battleship at its disposal. The Silhouette Gundam Kai's beam rifle is powered by a rechargeable E-cap and can be stored on the waist weapons mount.

The beam rifle is fitted with an underslung single-shot grenade launcher, which can be loaded with a variety of grenades. The grenade fired is not very effective against large ships, but is an ideal mid-range anti-mobile suit weapon. 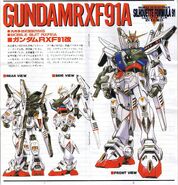 Retrieved from "https://gundam.fandom.com/wiki/RXF-91A_Silhouette_Gundam_Kai?oldid=453606"
Community content is available under CC-BY-SA unless otherwise noted.