The RX-END Gundam The End is a Gunpla from Gundam Build Fighters Try, built and piloted by Saga Adou.

An original Gunpla built by Saga Adou to fit his own fighting style, Gundam The End usually hides its main body behind a red cloak. The extendable gigantic arms at the sides are known as 'Fist the End' and they serve as the Gunpla's primary melee weapon/shield, while the DE Fangs launched from these arms are the primary ranged weapon. The Fist the Ends can also fire powerful beams, and launch a special attack known as 'Dead End Finger'. Gundam The End has another special attack as its ultimate technique, but not much is known about it. Other weapons of the Gunpla include two handguns, beam sabers generated from the standard hands' fingers, and the ability to open its abdomen like a 'mouth' to attack enemy unit or 'eat' enemy's beam attack. This mouth also hides a miniature Gunpla known as 'Ikkaku' that serves as a secret weapon.

The Gundam The End has multiple forms, there is the Guard Form whereby its wings cover the body for enhanced defensive strength, the Attack Form whereby the wings are spread open for higher offensive strength, the Akumaguy Form where the abdomen 'mouth' is used, and finally the Final Degundam Form where the Ikkaku is deployed. Although the Gundam The End is not based on any single MS, it uses several MS for reference. For example, the XXXG-01D2 Gundam Deathscythe Hell serves as the reference for the Gunpla's basic shape and movable wings, the JDG-00X Devil Gundam is the basis for the Fist the Ends' Gundam faces and their mouth opening gimmick, and the DE Fangs are inspired by similar remote-controlled weapons used by mobile suits in Mobile Suit Gundam 00.

A beam saber can be emitted from each of the Gunpla's standard fingers. The beam claws can be used for melee combat or to act as a makeshift shield against ranged attacks.

The pair of large arms at the sides of the Gunpla, they are normally used for melee combat and their backs can serve as shields. The arms have great reach as they are linked to the main body via extendable parts. A unique feature of the Fist the End is the Gundam Face on its palm, this face opens into a fanged mouth to fire a powerful beam or to bite the opponent. The DE Fangs are stored within these arms.

Sharp, conical remote weaponry released from the fingertips of the Fist the End to penetrate enemy units, they serve as the Gunpla's main ranged weapon. They can also arrange themselves into a hexagonal formation for greater defensive and striking power. Normally, such weapons are auto-controlled but Saga Adou is skilled enough to control several of them at once manually.

A pair of revolver-like handguns, they are the Gunpla's sole handheld weaponry and stored on the side skirt armor when not in use.

A form whereby the abdomen opens up into a mouth and the front shoulder armor panels slide open to reveal hidden sensors. In this form, the Gunpla's body resembles the face of a demon. The abdomen 'mouth' can be used to bite opponent in very close range or to 'eat' enemy's ranged beam attack, nullifying it. This form's weakness is that it allows the enemy to destroy the Gunpla from the inside by launching an attack into the open mouth.

The offensive form of the Gunpla, the red cloak is removed as the wings are now positioned at the back. Allows quick deployment of various weaponry, and the Fist the Ends can be used as shields.

The Akumaguy form with the Ikkaku deployed from within the abdomen 'mouth'.

A miniature Unicorn Gundam-like Gunpla hidden within the Gundam The Ends' abdomen, it can be deployed when the 'mouth' on the abdomen opens and serves as the unit's secret weapon. The Ikkaku is legless and a thick cord connects it to the Gundam The End's interior. When deployed, the Ikkaku's head can extend and operate as a drill, surprising and destroying enemy unit in close combat. The Ikkaku also has an alternate destroy mode-like form known as "Tsunowaru".

The defensive form of the Gundam The End, the wings cover the body to provide additional protection. In this form, the DE Fangs serve as the Gunpla's main weapon. This is also the default form when the Gundam The End launched, and its weakness is that melee combat capabilities are limited.

A special attack that uses the Fist the End, this attack is powerful enough to defeat the Build Burning Gundam's Ryusei Rasen-Ken even when the latter is equipped with the Winning Knuckle. 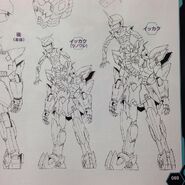 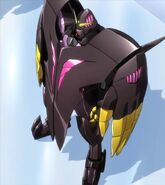 Both Fist the Ends' mouths opened

Beams from Fist the Ends' mouths 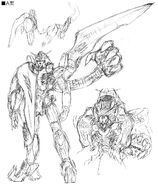