The RX-99 Neo Gundam is a mobile suit which appears in the manga series Mobile Suit Gundam Silhouette Formula 91 in UC 0123.

The Neo Gundam was based on the culmination of technology obtained from the Silhouette Formula Project and the concept of Gundam type mobile suits up until then. Though it was registered as "RX-99" with the Earth Federation Forces, its Anaheim internal code was "AFX-9000", with AFX being short for "Anaheim Formula Examination". Its most powerful ranged weapon was the Generative Beam Rifle Device (G-BRD), a large beam rifle with an integrated miniature generator. This weapon was based on the Strategic Naval Research Institute's VSBR.

In order to improve the survival rate of the pilot and the operation data, a Core Block System was adopted. Its backpack-mounted beam sabers serve as beam guns in Core Fighter mode. Similar to the FF-XII Core Fighter II, the Core Fighter's thrusters can be used when docked with the mobile suit as well. Unit 1's core fighter is equipped with a Neo-Psycommu system obtained from the Buch Concern.

Like many other mobile suits, the Neo Gundam was equipped with a pair of Vulcan guns in its head.

The Neo Gundam is equipped with two beam sabers stored in the Core Fighter, that when connected can be grabbed over the shoulder. In Core Fighter mode, these beam sabers function as beam guns and can switch to a rapid-fire mode.

The beam shield is a defensive technology based on the beam saber. Instead of being shaped as a blade, the plasma is shaped as a wide yet thin plane.

The G-BRD (pronounced "G-Bird") was inspired by the concept of mobile beam weapons, such as the Burstliner, the FXA-08R Mega Rider, and the Mega Bazooka Launcher, as well as sub-flight systems. It is based on illegally obtained data on SNRI's Variable Speed Beam Rifle (VSBR). Unlike the VSBR, however, it is a handheld weapon, powered by a miniaturized internal generator. The G-BRD also mounted rocket thrusters, allowing it to be attached to the Core Fighter of the Neo Gundam to work as a booster for the fighter. It is extremely powerful, and was able to pierce through the outer wall and solar mirrors of a space colony and completely vaporize the bridge of a Ra Cailum-class battleship

The Neo Gundam was one of the most advanced mobile suits created by Anaheim Electronics as part of its "Silhouette Formula Project". By combining several of the most advanced weapons of this time with a classic core block system, the Neo Gundam was among the most powerful mobile suits in UC 0123. Nevertheless only two units were produced and given to the 302nd fleet, who operated as part of the Earth Federation's Londo Bell unit. While Unit 1 was painted near completely black, Unit 2 featured a more classical white and blue color scheme. Unit 2 would later be stolen by Tokio Randall, leading to the destruction of both Neo Gundam units, although Tokio would survive in the Core Fighter of Unit 2. 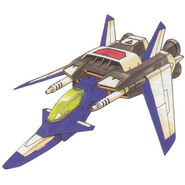 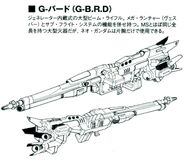 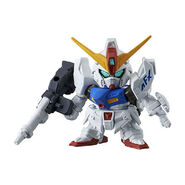