The RX-94 Mass Production Type ν Gundam is a variant of the RX-93 ν Gundam that first appeared as part of Kunio Okawara's M-MSV.

The Mass Production Type ν Gundam was developed by Anaheim Electronics based on the concept of adapting Amuro Ray's RX-93 ν Gundam into a mainstay mobile suit superior to the RGM-89 Jegan. Its design was first proposed in preparation of the possibility that Char Aznable's Neo Zeon would mass produce the Newtype-use mobile suit, the MSN-03 Jagd Doga. A decision was later made to only produce a limited number of the Mass Production Type ν Gundam for ace pilots.

The materials used in the mobile suit's armor and frame are a rank below those of the ν Gundam, but the unit's basic performance is said to reach 80% of the latter. The Mass Production Type ν Gundam retains the ν Gundam's psycoframe and the ability to utilize remote weaponry known as Fin Funnels. For pilots who are not Newtype, therefore unable to utilize the Fin Funnels, the Mass Production Type ν Gundam can be equipped with INCOM Units on the sides of the backpack to replicate the use of remote weaponry.

​A device held in the mobile suit's hands when operated and powered by a rechargeable energy capacitor, it emits a blade of plasma contained by an I-Field and can cut through most armor not treated with anti-beam coating. The Mass Production Type v Gundam stores a beam saber on the rear skirt armor.

An optional weapon for mounting on the forearms, it is a downgraded beam rifle with a less powerful, more scattered shot. Thus, it is less effective at long range, but better at close range due to a more spread out shot, similar to a shotgun effect.

A remote weapon designed for use with the quasi-psycommu system. These disc-shaped devices are armed with internal beam guns and controlled via wire cables. Every time an INCOM changes its flight direction, it deploys a tiny relay INCOM to hold the wire in place and maintain its connection to its parent mobile suit. When the pilot recalls the INCOM, it retraces its course as the wire is retracted. The Mass Production Type v Gundam can mount two INCOM Units, each containing two INCOMs, on the sides of its backpack as an alternative to the Newtype-use Fin Funnels. They allow pilots with no Newtype capabilities to use remote weaponry.

The same type of remote weaponry as used by the ν Gundam, the Mass Production Type v Gundam can mount a set of 6 Fin Funnels on the left side of its backpack and control them via psycoframe technology. Like the ν Gundam, the Mass Production Type v Gundam cannot recharge its Fin Funnels, therefore limiting their operating time. However, the Fin Funnels still have longer operating time than normal Funnels as they have built-in generators instead of being powered by the E-caps used by the latter. The generators also allowed the Fin Funnels to fire more powerful beams. The Fin Funnels also had the ability to generate a unique beam shield, known as a "Fin Funnel Barrier", to defend against both beam weaponry and solid projectiles.

A standard hand carried ranged beam weapon is the beam rifle, which fires concentrated mega particles that can damage any ordinary armor not specially treated to resist it. The Mass Production Type v Gundam can seemingly be equipped with the same beam rifle as used by the ν Gundam.

Technically a large rocket launcher, it could fire several rockets to attack targets at long range. No mass-production MS' armor is able to stop this weapon, but it has a slow rate of fire and a fairly little ammunition.

Developed through referencing the ZZ Gundam's Hyper Beam Sabers, this weapon can function as a Beam Saber or a Beam Cannon. When equipped with the Fin Funnels, the Mass Produced Type ν Gundam can equip a Beam Saber/Beam Cannon the right side of its backpack. Two of this weapon is equipped when the mobile suit uses the INCOM Units.

The same shield as utilized by the ν Gundam, it features a built-in 7.8 MW beam cannon and four missiles.

The Quasi-psycommu system was developed to allow non-Newtypes the use of remote weaponry. It actively scan the pilot's brainwaves, no matter how weak they are, and then the computer translate the thoughts into commands to be issued to remote weapons. Using the quasi-psycommu, non-Newtypes can control simple wire-guided remote weapons, such as INCOMs. INCOMs, unlike funnels or bits, still have to be tethered to their control unit by wires because the electrical signals to the INCOM would otherwise be disrupted by Minovsky Particles.

The cockpit is composed of microscopic Psycommu receptors that allow the Newtype pilot to control the suit as if it is their own body as well as for better control of remote weaponry. A psycommu receiver is located at the back of the pilot's headrest.

Development of the Mass Production Type ν Gundam was implied to have started some time in between the three months of development of the v Gundam. Although labeled as a mass production type unit, a decision was later made to produce the mobile suit in limited quantity for ace pilots. 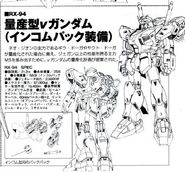 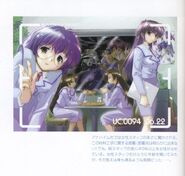 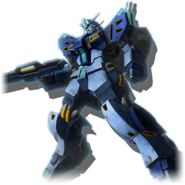 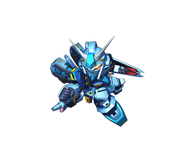 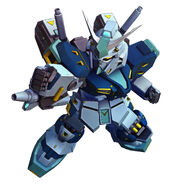 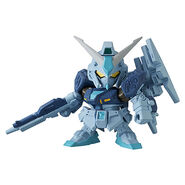 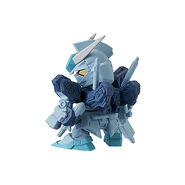 Retrieved from "https://gundam.fandom.com/wiki/RX-94_Mass_Production_Type_ν_Gundam?oldid=505622"
Community content is available under CC-BY-SA unless otherwise noted.