Tatsuya's debut Gunpla, a custom HGUC ν Gundam with a Hi-ν Gundam color scheme. The backstory for the unit is that it is a dream version of the original ν Gundam whose frame was partially sealed as its true output is too much for stability. Tatsuya was so engrossed and focused on building the main body that he left out the fin funnels. The reason for the omission of the fin funnels is due to them still be developed at Anaheim Electronics. Although he eventually drops the fin funnels completely as he has trouble controlling them.

Realizing that Toru has years of experience in the art of Gunpla ahead of him, Tatsuya decided to study vehicle models and uses the knowledge to upgrade the ν Gundam Vrabe by polishing it in fine detail and equipping it with the "Mercury Lev" units, a multipurpose weapon systems given to Tatsuya by Toru Satsuki. This form is dubbed as Real Type ν Gundam Vrabe. It was upgraded again into ν Gundam Vrabe+ by attaching a long blade to Mercury Lev gun unit's railgun.

The Mercury Lev is a multipurpose weapon system, it can be mounted on the arms or on the backpack. There are two versions, the Gun Unit and the Sword Unit, each of them is armed with several types of guns and blades respectively for use in different situations. Tatsuya's Gun Unit is later customized, with a detachable long blade attached to the railgun.

A pair of vulcan guns are mounted in the ν Gundam Vrabe's head, they are mainly used to intercept incoming missiles and enemy units at close range.

Stored on the backpack, it is the primary beam saber. Features a curved beam blade, and can also emit a short blade from the bottom of the grip.

Equipped on the left arm, it is a standard-type beam saber and has a lower output than the primary beam saber.

Stored on the backpack, the 280mm new hyper bazooka has a magazine of 5 rounds and can deal extensive damage. 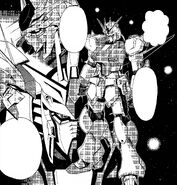 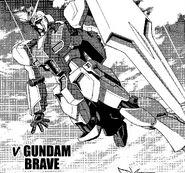 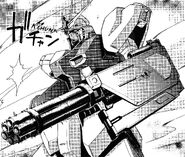 With Gatling gun of the Mercury Lev (Gun Unit) (Ep 03) 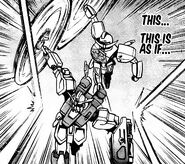 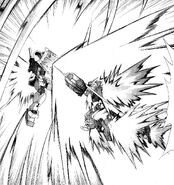 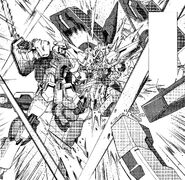 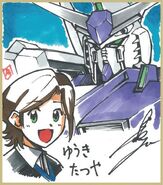 Retrieved from "https://gundam.fandom.com/wiki/RX-93_%CE%BD_Gundam_Vrabe?oldid=446823"
Community content is available under CC-BY-SA unless otherwise noted.