Unlike the RX-93 ν Gundam, the Double Fin Funnel Type has its custom beam saber's storage rack removed to carry fin funnels on both sides of the back, resulting in a maximum of 12 fin funnels. In addition, the heavy weapon system can also be mounted on this unit.

A high-powered beam rifle with a output of 3.8 MW. At maximum output, the beam fired is comparable in power to that of a battleship-class main cannon from the same time period. It can also function as a beam machine gun by changing the burst selector. A single-shot grenade launcher is mounted above the rifle's barrel.

A standard-issue beam saber stored on the left forearm, it can be drawn quickly to attack enemies in close range.

A remote weapon unique to the ν Gundam. When attacking, it bends into a U shape and a magnetic field is created between the two generator arms for generating and accelerating the mega particles. Since they have built-in generators rather than the E-caps used by funnels, they are more expensive to construct, but they have longer operational time and fire more powerful beams. Each fin funnel has an output of 3.0 MW and can fire 7 shots in a single charge. The fin funnels also can generate a unique beam shield, known as a "fin funnel barrier", to protect against beam weaponry and solid projectiles. However, if an enemy funnel enters the barrier, it may cause physiological damage to the pilot due to psycho-wave interference. Although larger than normal funnels, the fin funnels have higher mobility as its triple block structure allows for AMBAC movements in addition to being propelled by its thruster.

A 280mm five round magazine hyper bazooka that has improved firing range and destructive power compared to the Hyper Bazooka used by other Earth Federation MS. The bazooka can be fired even when stored on the backpack, catching the opponent by surprise. It is capable of destroying an enemy unit in a single shot and is mostly used to take out slow, heavily armored targets.

The cockpit is composed of microscopic Psycommu receptors that allow a Newtype pilot to control the suit as if it is their own body as well as to have better command over remote weaponry. A psycommu receiver is located at the back of the pilot's headrest. 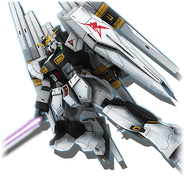 Retrieved from "https://gundam.fandom.com/wiki/RX-93_ν_Gundam_Double_Fin_Funnel_Type?oldid=496802"
Community content is available under CC-BY-SA unless otherwise noted.