The RX-93 ν Gundam (aka Nu Gundam, Nu) is a mobile suit that appears in Mobile Suit Gundam: Char's Counterattack. It was designed and piloted by Amuro Ray.

The ν Gundam is one of the most advanced mobile suits during the Second Neo Zeon War in U.C. 0093, together with Char Aznable's MSN-04 Sazabi, it is used by Amuro Ray who also came up with its basic design. It was manufactured at Anaheim Electronics' Von Braun plant and completed in a short period of time (about three months) under the supervision of chief engineer October Saran[1][2]. Its design is based on the average specification values of each successive generations of Gundam-type units from the original RX-78-2 Gundam to the MSZ-010 ΖΖ Gundam, and updated with state-of-the-art technologies introduced at the time [3]. Various test data collected from the ARX-014P Silver Bullet (Funnel Test Type), the YRA-90A μ Gundam and the RX-9 Narrative Gundam were also used in its development.

The ν Gundam's design focuses on versatility and operational aspects, as well as emphasis on reliability and durability for protracted battles[3]. It adopts unitized parts that are designed according to EFF standards, except for the Psycho-Frame, for easier procurement of parts and materials and reducing special components as much as possible. It can be easily repaired due to maintenance feedback and combat data. In addition, it reflects Amuro Ray's experience as an MS pilot cultivated over the years.

Incorporating the Psycho-Frame technology secretly provided to Anaheim Electronics by Char Aznable of Neo Zeon, the ν Gundam was able to utilize Psycommu weapons and channel the emotions and mental energies of a Newtype pilot. It is also the first Gundam-type machine to be equipped with Funnels, and a newly developed MS control program is installed to account for the ν Gundam's center of mass during the separation and movement of the Funnels[3]. Despite its short development time, the ν Gundam proved itself to be a formidable mobile suit and when combined with legendary ace pilot Amuro Ray's immense skill and experience, this powerful, state-of-the-art machine was able to almost single-handedly hold back the whole Neo Zeon force, and its Psycho-Frame was put to the test to determine the history of humanity living on earth.

A basic armament of many Federation mobile suits, a pair are mounted on the ν Gundam's head. The Vulcan Guns are mainly for intercepting incoming missiles/rockets, destroying mobile suit sensors, and engaging lightly-armored vehicles.

The primary beam saber used by the ν Gundam, it is stored on the right side of the backpack and is also known as Custom Beam Saber. Output 0.85 MW. Features a curved beam blade, and can also emit a short blade from the bottom of the grip. Changes to the specifications of the amplifier and emitter allow it to emit beam blade of different shape. Compared to earlier models, it is more energy efficient due to the 'Auto Power On' feature, which enables the saber to instantaneously generate a beam blade only during moments of impact with enemy suits.

Equipped on the left arm's shield mount base. It is a standard-issue beam saber and has a lower output than the primary beam saber.

A high-powered beam rifle with a output of 3.8 MW. At maximum output, the beam fired is comparable in power to that of a battleship-class main cannon from the same time period[2]. It can also function as a beam machine gun by changing the burst selector. An independent aiming device was initially meant to be mounted above the rifle’s barrel, but it was changed to a single-shot grenade launcher that was originally intended to fire high intensity flash round for defensive purpose rather than offensive projectile[4].

The ν Gundam is armed with a 280mm five round magazine hyper bazooka that has improved firing range and destructive power compared to the Hyper Bazooka used by other Earth Federation MS. The bazooka can be fired even when stored on the backpack, catching the opponent by surprise. It is capable of destroying an enemy unit in a single shot and is mostly used to take out slow, heavily armored targets.

A custom shield emblazoned with Amuro's emblem. It features a built-in 7.8 MW beam cannon and four missiles. Amuro uses it in many strategic ways, such as fooling enemies that he was shot down by leaving the shield and the New Hyper Bazooka, and attacking enemies once they lower their guards. Attached to the left arm's beam saber compartment.

A remote weapon unique to the ν Gundam, model number: AEV/PFF93AR. When attacking, it bends into a U shape and a magnetic field is created between the two generator arms for generating and accelerating the mega particles. Despite their name, the fin funnels are in function "bits", since they have built-in generators rather than the E-caps used by funnels[3]. While this made them more expensive to construct, it gives the fin funnels a longer operational time and allow them to fire more powerful beams compared to normal funnels. Each fin funnel has an output of 3.0 MW and can fire 7 shots in a single charge. The fin funnels also can generate a unique beam shield, known as a "fin funnel barrier", to protect against beam weaponry and solid projectiles. However, if an enemy funnel enters the barrier, it may cause physiological damage to the pilot due to psycho-wave interference. Although larger than normal funnels, the fin funnels have higher mobility as its triple block structure allows for AMBAC movements in addition to being propelled by its thruster. With the help of the Psycho-Frame technology, Amuro can control the fin funnels with his thoughts more effectively.

During the events in Mobile Suit Gundam: Char's Counterattack, the ν Gundam grabs a standard type beam machine gun from a Geara Doga and uses it in the final battle against the MSN-04 Sazabi.

The cockpit is composed of microscopic Psycommu receptors that allow a Newtype pilot to control the suit as if it is their own body as well as to have better command over remote weaponry. A psycommu receiver is located at the back of the pilot's headrest. Cockpit also features airmats that are used in case of impact.

Following Amuro's failure to stop Char in attempting to drop Fifth Luna, Amuro decided to design a mobile suit that would be able to combat Char's MSN-04 Sazabi. Unknown to Amuro, Char learnt of this and allowed Anaheim Electronics to pass on the psycho-frame technology for the ν Gundam's use. However, testing of this machine was interrupted when fighting between Londo Bell and Neo Zeon forces force Amuro and his girlfriend Chan Agi to take the ν Gundam with them to save everyone.

Sadly, the lack of testing would easily been shown when, during one skirmish, Amuro's panicking caused his fin funnels to react, forcing Gyunei Guss to kill his captive, Kayra Su. As Londo Bell forces moved to stop Char from dropping Axis, Amuro and Char went head to head, battling one another and practically ravaging their suits. In the end, another flaw revealed itself - the psycho-frame resonated with high emotions and willpower, pushing Amuro's already amazing Newtype powers to new heights, and managed to push Axis away from the Earth. The resonance creates a light that could be seen from Earth.

An early version of the ν Gundam, the first lot was built at Anaheim Electronics' Von Braun factory prior to the company obtaining the Psycho-Frame technology. It was used for operational tests, and the engineers as well as Federation Forces' officials present were all shocked by the machine's high degree of completion. 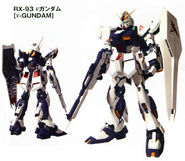 Under construction by Anaheim Electronics

Head close up with eyes covered 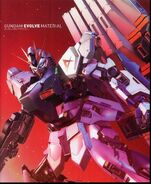 On the cover of Gundam Evolve Material book 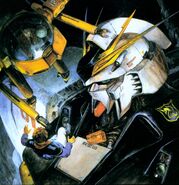 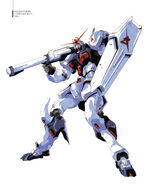 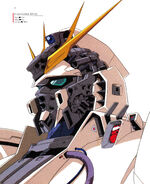 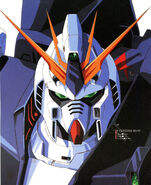 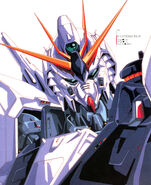 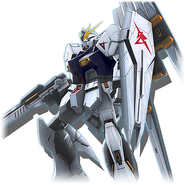 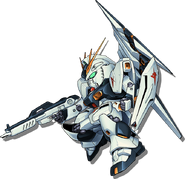 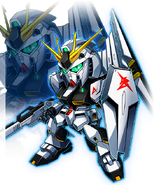 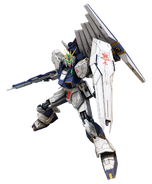 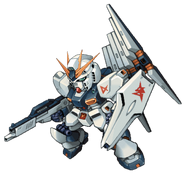 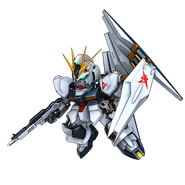 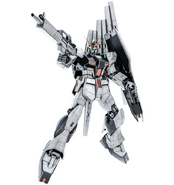 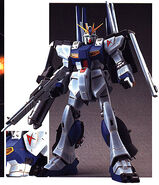 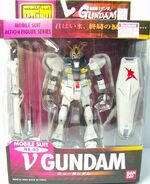 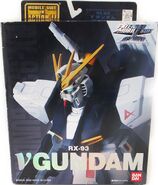 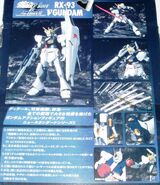 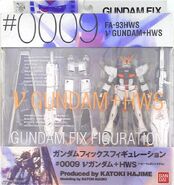 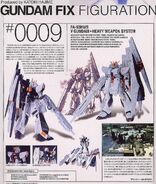 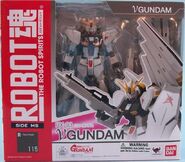 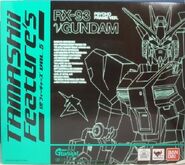 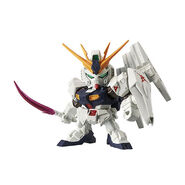 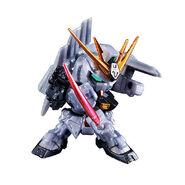 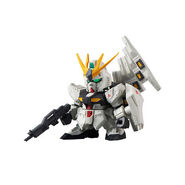