The ν-Zeon Gundam was created based on the paradoxical concept of a ν Gundam allied with Zeon forces. Its design is said to embody Captain Zeon's determination to improve the manners of Divers in GBN, regardless of whether they side with the Federation or Zeon forces. Captain Zeon tends to confront ill-mannered Divers through dialogues, but most of these incidents sadly end in battles. Therefore, the armaments he used for divine retribution are capable of merciless one-hit kill attacks.

A massive physical sword that is robust enough to be used as a shield. Stored on the Gunpla's back when not in use, it has two other modes: the Hi Mega Bow Gun and Hi Mega Saber. According to Captain Zeon in Hobby Hobby Imaging Divers Ver.C.Z Vol.2, the Zeonic Sword is so huge and powerful that its weight and output have to be reduced before it can be used by generic Gunpla. This can be seen with the weapon's replica, the Mass-Produced Zeonic Sword, that requires two Gunplas in order to be used at full power.

A mode where the Zeonic Sword unfolds and become a powerful beam firearm resembling a bow gun that can hit multiple targets at once.

A mode where the Zeonic Sword opens up to emit a longer beam blade that can slice through multiple targets. It can also create a beam replica of the Axis asteroid base, which can then be dropped on enemies.

Remote weaponry based on the Fin Funnels, the four Terrible Funnels are unique to the ν-Zeon Gundam and has three barrels each. When not in use, they are mounted on the Gunpla's back and act as propulsion devices in the form of a cloak; in this form they are referred to as "Cape Thrusters".

A pair of small melee weapons personally chosen by Captain Zeon and stored on the Gunpla's back. Even if most of his weapons are rendered unusable, a hero clenches his small weapon and never gives up.

The "Z" chest emblem can emit a beam to mark the Gunplas of ill-mannered Divers.

Utilizing the Zeonic Sword's Hi Mega Saber mode, the ν-Zeon Gundam creates a beam replica of Axis and drops it on enemy targets.

The ν-Zeon Gundam is featured in multiple G-Tube videos showing Captain Zeon fighting Divers he deems as ill-mannered. In one such video, he fought against the "Three Gaza Brothers" and promptly defeated them by dropping a beam replica of Axis. Later, another video showed him fighting a custom GFAS-X1 Destroy Gundam with help from the reformed Three Gaza Brothers.

Using The Axis will fall on all rule breakers! 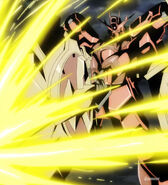