In addition to a more bulky design, the Hi-v sports a white and violet (CCA-MSV)/white and blue (official setting) color scheme to distinguish it from the ν Gundam's white and black paint job. Unlike the ν Gundam, the Hi-ν Gundam has a pair of funnel racks on its backpack where its fin funnels can be mounted for recharging. The backpack also has a stabilizer in the center and can mount two ejectable propellant/thruster units at the bottom.

The Hi-ν also expands on the ν Gundam's armaments, with an added machine gun in its right forearm and the inclusion of a third beam saber. It can also use a Hyper Mega Bazooka Launcher, an improved model of the weapon used by the MSN-00100 Hyaku Shiki during the Gryps Conflict, when heavier firepower is needed. The Hi-ν Gundam has a psycoframe cockpit like the ν Gundam, allowing Amuro Ray greater control over the mobile suit, bringing out its full performance.

The Hi-ν Gundam carries three beam sabers for close combat, one stored in the left forearm for rapid deployment and another two stored in the back-mounted funnel racks. The beam sabers stored in the funnel racks are capable of producing a second beam blade from the bottom of the hilt for surprise attacks or handling multiple opponents in combat. All three sabers' beams are tinted a royal blue to match the Hi-ν's paint job.

The Hi-ν Gundam carries 6 fin funnels, mounted on the mobile suit's back in a wing-like formation . These remote weapons are the Hi-ν's trump card in engaging enemies from a single opponent to multiple enemies. Compared to previous mobile suit-use remote weapons, the fin funnels have grater firepower thanks to onboard generators. The fin funnels can arrange themselves into geometric formations to deploy the fin funnel barrier like the ν Gundam, a defensive field that can repel any attacks with lower output than the fin funnel's. The Hi-ν can recharge its fin funnels when they are attached to the pair of funnel racks.

A propellant tank with additional verniers thrusters at the sides. The pair of propellant/thruster units are attached to the bottom of the backpack and have the same functionality as the Principality of Zeon's stürm boosters: to allow the equipped mobile suit to move speedily without expanding its own propellant. The units are discarded once their propellant are used up. 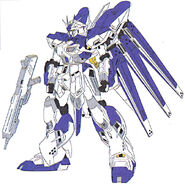 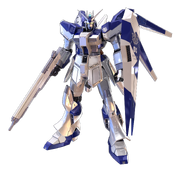 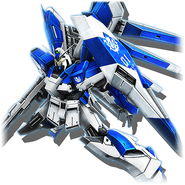 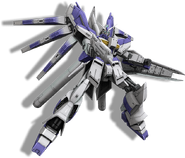 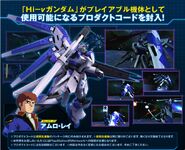 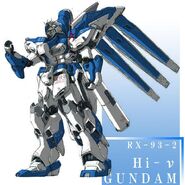 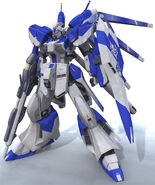 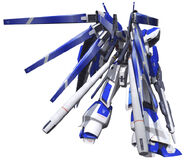 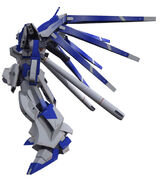 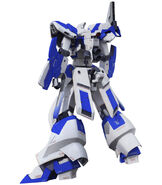 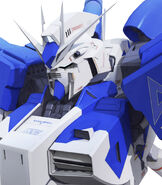 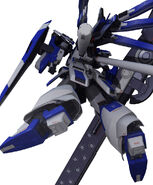 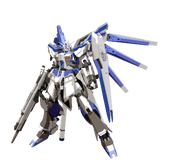 Retrieved from "https://gundam.fandom.com/wiki/RX-93-%CE%BD2_Hi-%CE%BD_Gundam?oldid=433734"
Community content is available under CC-BY-SA unless otherwise noted.