The RX-92LAS G-Commander is a mobile fortress that's appears in the manga short-story The Dog of War U.C. 0092.

The RX-92LAS G-Commander is a unit created by the Earth Federation Forces to increase the armament of the RX-92B Prototype ν Gundam. Based on the design of the ν Gundam Heavy Weapons System Type and the G-Armor, the G-Commander is heavily armored ground-combat "Land Armor System". It achieves high ground mobility with large hover units to offset its weight. It is equipped with numerous powerful weapons for medium to long-range combat.

MF-92S G-Commander
A proposed plan for the G-Commander was to have it mounted with small unmanned units to compensate for its weakness in close combat. Equipped with 1x beam rifle, 4x beam turret, 1x shield with beam rifle, and 2x M4AA2R BGR (Body Guard Radiobeam) remote-controlled mobile weapon, each stored at the pair of rear thrusters. 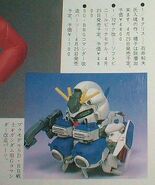 Retrieved from "https://gundam.fandom.com/wiki/RX-92LAS_G-Commander?oldid=451604"
Community content is available under CC-BY-SA unless otherwise noted.