The RX-81 G-Line is a mobile suit that appeared in Mobile Suit Gundam Battlefield Record UC 0081.

As the mass-produced GM series placed priority on productivity, its specifications are considerably lowered from those of the RX-78-2 Gundam. The RX-81's plan retains the specifications of the Gundam while increasing the mobile suit's variety of weapons and armor by incorporating the FSWS, and as a result, it has several forms it can change into. Backpacks can be replaced according to the situation, with two thrusters on the ground and six for space.

The standard close range armament for most Federation mobile suits, it is a small device held in the mobile suit's hands when operated and is powered by a rechargeable energy capacitor. The beam saber emits a blade of plasma contained by an I-Field and can cut through most armor not treated with anti-beam coating. The RX-81 G-Line has two beam saber stored on its backpack.

The RX-81 development program was temporarily frozen during the One Year War to prioritize production of the GM. The program was resumed in U.C. 0081 after the turmoil of the postwar period had subsided and a limited number of RX-81 were made due to their high cost. The Earth Federation's Phantom Sweep Team that was tasked with taking down the Zeon remnant group, the Invisible Knights, was one of those given the RX-81. 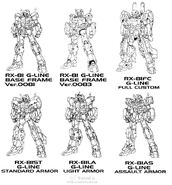 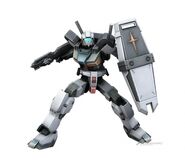 Retrieved from "https://gundam.fandom.com/wiki/RX-81_G-Line?oldid=439368"
Community content is available under CC-BY-SA unless otherwise noted.