The RX-81ST G-Line Standard Armor is a variant of the RX-81 G-Line series. It first appeared Kunio Okawara's in M-MSV. It was redesigned and updated for the video game Mobile Suit Gundam: Battlefield Record U.C. 0081.

RX-81ST G-Line Standard Armor is the RX-81 G-Line's standard configuration and is usable in all ranges of combat, making it an extremely versatile suit. When needed, it can be equipped with additional armaments on its backpack for enhanced attack power. Fully equipped, it mounts a backpack with two additional medium stabilizers for the purpose of extending the operation time.

The standard close range armament for most mobile suits, it is a small device held in the mobile suit's hands when operated and is powered by a rechargeable energy capacitor. The beam saber emits a blade of plasma contained by an I-Field and can cut through most armor not treated with anti-beam coating. A pair are stored on the backpack in the G-Line Standard Armor's base configuration, and they are relocated to the rear skirt armor if additional equipment is mounted on the backpack.

In U.C. 0081, the RX-81ST G-Line Standard Armor was assigned to the Earth Federation's Phantom Sweep Team to take down the remaining Invisible Knights soldiers of the Zeon remnants. Its initial pilot was Cherie Allison, however after Cherie was discovered to be a Zeon Spy, she was held captive and her G-Line was customized into RX-81AS G-Line Assault Armor. It was re-assigned to Phantom Sweep Team's Robert Hartley.

In the Mobile Suit Zeta Gundam Define manga, Amuro Ray would use this machine while training pilots in a simulator.

Lineart for the Katoki Hajime redesign 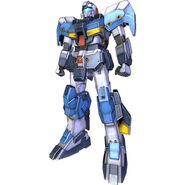 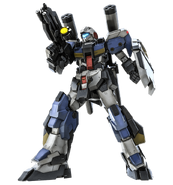 Retrieved from "https://gundam.fandom.com/wiki/RX-81ST_G-Line_Standard_Armor?oldid=498115"
Community content is available under CC-BY-SA unless otherwise noted.