The RX-81LA Light Armor RX-81 a variant of the RX-81 G-Line series. It first appeared as a part of Kunio Okawara's M-MSV. The Light Armor RX-81 was redesigned and updated by Katoki Hajime for the video game and manga of the same name Mobile Suit Gundam: Battlefield Record U.C. 0081.

Out of the three equipment set the RX-81LA Light Armor RX-81 is the lightest style, low defense, but the highest form of mobility. It is a high-performance MS deployed mainly by ace pilots. The Light Armor RX-81's armor is made very thin to reduce the weight and short range combat armaments have been removed in order to obtain the highest possible thrust-weight ratio and speed. The backpack mounts a large stabilizer for the purpose of improving its high-mobility performance. It is equipped with a head-mounted sensor unit for long-range attacks, and can be equipped with various optional weapons such as missile launchers, an assault cannon, or gatling smasher guns.

The standard close range armament for most mobile suits, it is a small device held in the mobile suit's hands when operated and is powered by a rechargeable energy capacitor. The beam saber emits a blade of plasma contained by an I-Field and can cut through most armor not treated with anti-beam coating. A pair are stored on the backpack in the G-Line Light Armor's base configuration, and they are relocated to the rear skirt armor if additional equipment is mounted on the backpack.

A large-caliber custom beam rifle for the G-Line Light Armor, it has a large stock to ensure stability during firing, as well as a large sensor on the side for increased precision.[1]

In 0081 U.C. the RX-81LA G-Line Light Armor was assigned to the Earth Federation Forces's Phantom Sweep Team to take down the Invisible Knights Zeon remnants. 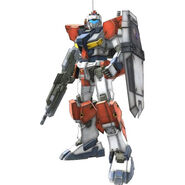 The G-Line Light Armor as seen in Gundam Battle Operation 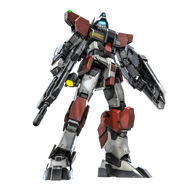 Lineart of the Katoki Hajime redesign