The RX-81AS Assault Armor RX-81 is a variant of the RX-81 G-Line that first appeared in Mobile Suit Gundam: Battlefield Record U.C. 0081.

The RX-81AS Assault Armor RX-81 is a close range mobile suit equipped with additional, thick armor derived from RGM-79FP GM Striker's. When required, it can mount a drum-type backpack with seven built-in thrusters to improve its thrust.

Mounted on the head, the pair of shell firing weapons have high rate of fire but low power and typically cannot pierce a mobile suit's armor, though they can damage lightly-armored areas such as the sensors. They are ideal for shooting down small, lightly armored targets such as missiles, attack vehicles, etc.

The standard close range armament for most mobile suits, it is a small device held in the mobile suit's hands when operated and is powered by a rechargeable energy capacitor. The beam saber emits a blade of plasma contained by an I-Field and can cut through most armor not treated with anti-beam coating. A pair are stored on the backpack in the G-Line Assault Armor's base configuration, and they are relocated to the rear skirt armor if additional equipment is mounted on the backpack.

A lance-type close combat weapon that incorporated technology originating from the Principality of Zeon. The lance's tip can be heated during use.

A shield that is integrated with a large claw at its tip. This combination allows the G-Line to quickly switch between defense and close quarter combat.

In U.C.0081, the RX-81AS G-Line Assault Armor was assigned to the Earth Federation's Phantom Sweep Team to take down the Principality of Zeon remnant group, the Invisible Knights. 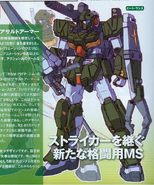 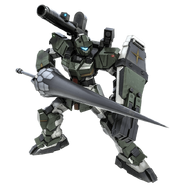 Retrieved from "https://gundam.fandom.com/wiki/RX-81AS_G-Line_Assault_Armor?oldid=446358"
Community content is available under CC-BY-SA unless otherwise noted.