The RX-80PR Pale Rider is a prototype mobile suit featured in the Mobile Suit Gundam Side Story: Missing Link video game and manga.

Following its successful mass production of mobile suits, the Earth Federation Forces began working on various modification plans as well as next-generation units.[1] One of the machines created was a prototype, next-generation unit given the model number of 'RX-80'.[1] This machine incorporated the latest technologies introduced during the One Year War, resulting in high performance and adaptability to a wide range of equipment. However, its development costs were high, dooming any possibility of mass production and seemingly consigning it to being a data collection unit.

The RX-80 was later acquired by a mysterious official named Grave, who wanted a high-performance machine for the special "HADES (Hyper Animosity Detect Estimate System)" based on the EXAM System.[1] With the HADES' core unit installed in its head, the mobile suit was given the code name "Pale Rider", derived from the name of the fourth and final horseman of the Four Horsemen of the Apocalypse.[1] The name also has a second meaning: since the HADES forcefully takes control of the mobile suit when activated, with the pilot serving as little more than a biological component, the mobile suit controls the pilot, rather than the other way around. Hence the mobile suit was the "Rider", rather than the horse.[2]

While the Pale Rider is a powerful machine, this came at the cost of shorter operating time.[1] It served as the core mobile suit of Grave's "Pale Rider Project" and was deployed on various black-ops missions.

A pair of shell firing weapons, they have high-rate of fire, but little power. They can damage lightly armored areas such as the sensors and are ideal for shooting down small, lightly armored targets such as missiles, attack vehicles, etc. Due to HADES's core unit being located in the Pale Rider's head, its vulcan guns are mounted independently on the sides of the head, unlike most Earth Federation Forces' mobile suits that have the guns built into the head.[1] The Pale Rider's vulcan guns have the added ability to rotate up and down.

The beam saber is a small device held in the mobile suit's hands when operated and is powered by a rechargeable energy capacitor. It emits a blade-shaped beam to cut through most armor not treated with anti-beam coating. The Pale Rider uses the standard type of beam saber as other Earth Federation Forces' mobile suits, with one stored on each side skirt armor.[1] Due to the Pale Rider's reduced operating time, its beam sabers are not meant to be recharged by the mobile suit's generator.[1]

Mounted on the forearms, this is the same weapon as used by Gundam Unit 4 "G04" and Unit 5 "G05".[1] The pair of hand beam guns have short firing range due to low focusing power, but they can rapid fire beams with sufficient firepower for anti-MS combat.[1]

The bullpup machine gun was a system weapon developed as a Space/Ground dual use projectile weapon. Though compact, it has sufficient anti-MS firepower while maintaining accuracy. Its muzzle velocity is increased due to the use of new gunpowder and this enables it to easily penetrate the armor of Zeon's mobile suit. A box-like sensor system incorporating a video camera and laser sensor is installed at the top, and when this system is used alongside the mobile suit's targeting system, target acquisition capability is enhanced. The accuracy of this weapon improves dramatically with the support of HADES.

The same beam rifle as used by Gundam Unit 4 "G04" and Unit 5 "G05". Powered by energy CAP technology, it is an enhanced version of the beam rifle carried by the RX-78-2, with improved output as well as accuracy.

The same shield as used by the GM Striker, it was developed for ground-based, anti-mobile suit melee combat.[1] This defensive armament can be used as a striking weapon thanks to the two pile bunkers mounted at the tip.[1]

A customized version of the 180mm cannon used by the RX-79［G］ Gundam Ground Type, etc.[1] It is attached to the back of the Pale Rider via an extendable support arm and its barrel is folded when not in use.[1] The cannon can be fired in this folded state for close-range combat, with the barrel unfolding for long-range shooting.[1]

A rare, simplified, optional armament deployed by the Earth Federation Forces during the One Year War.[1] The Pale Rider mounts one of this 3-tube missile launcher on each leg.[1] Although they can be purged after use to prevent dead weight, the Pale Rider is not affected by the added weight and so they become part of its standard ground-use armaments.[1] They are used for restricting enemy mobile suit movements, destruction of ground facilities and land battleships, as well as sweeping ground attacks.[1]

A large Gatling gun with immense firing rate. Drum-fed and stored on a weapons mount when not in use. It is similar to the one previously used by Gundam Unit 5 "G05".

The same shield as used by Gundam Unit 4 "G04" and Unit 5 "G05", it can collapse or extend to suit the combat situation.

An acronym for HYPER ANIMOSITY DETECT ESTIMATE SYSTEM. This controversial system was created by a top secret research laboratory in Augusta based on data and samples of the EXAM System provided under pressure from the upper management. When activated, the HADES forcibly disables all the mobile suit's limiters to draw out 100% of the machine's performance, it also transmits to the pilot the optimal solution from a learning computer and can even forcibly maneuver the mobile suit.[1] Although imperfect, the system also sought to pre-read enemy pilot's thoughts via sensing the Psycommu waves.[1] The activation of the HADES caused the exhaust vents of the mobile suit to become red hot due to forceful venting of gases, and like the EXAM System, the mobile suit's sensors also glow red.[1] To withstand the high Gs from the mobile suit's heightened performance and enhance coordination with the HADES, the pilot is mentally and physically enhanced through drugs and inhumane bodily modifications. The treatments also served to dull all unnecessary thoughts, making the pilot a part of the system. However, all these can exert a toll on the pilot, leading to memory impairment.

A special set of external fuel tanks and thrusters to give the unit higher speed and better maneuverability in space. The Pale Rider's operating time is also extended.

It was piloted by Chloe Croce, a Cyber Newtype who was based at the Augusta Institute. It was later modified into the AMX-018［HADES］ Todesritter by Neo Zeon.

Appears in the manga version of Mobile Suit Gundam Side Story: Missing Link, where events are depicted differently from the game. A damaged Pale Rider was repaired by Zeon remnants after the One Year War using parts from the Gelgoog series and is armed with weapons from various Zeon mobile suits, such as a pair of twin beam swords from the Gelgoog in place of the two beam sabers, a pair of leg-mounted 6-tube missile pods from the Efreet Custom, the large beam machine gun and forearm-mounted beam spot guns of the Gelgoog Jäger, Dom's Giant Bazooka, etc. The 'VG' in its name refer to its pilot, Vincent Gleissner, leader of the former Principality of Zeon's "Marchosias" team. 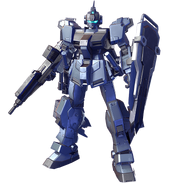 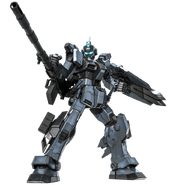 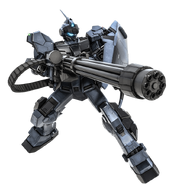 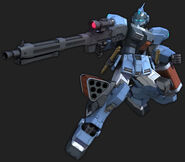 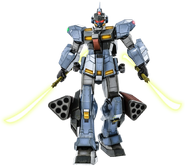 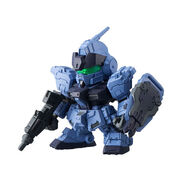