The RX-80PR-2 was the mass production test unit of the Pale Rider Plan. Since it was the culmination of the entire project, it was named "Cavalry". Its main difference from the RX-80PR Pale Rider was a limiter placed on the HADES system to ease the burden on the pilot, though there was still risk of the unit going berserk. Several hard point mounted weapons are omitted in favor of the Composite Weapon "Shekinah" to reduce cost.

A pair of shell firing weapons, they have high-rate of fire, but little power. They can damage lightly armored areas such as the sensors and are ideal for shooting down small, lightly armored targets such as missiles, attack vehicles, etc. Like the original RX-80PR Pale Rider, the Pale Rider Cavalry's vulcan guns seem to be mounted independently on the sides of the head.

The beam saber is a small device held in the mobile suit's hands when operated and is powered by a rechargeable energy capacitor. It emits a blade-shaped beam to cut through most armor not treated with anti-beam coating. Two are stored on the sides of the backpack.

The beam javelin is an alternate form of the beam saber, with an extended handle and a three-pronged beam at the end. The long reach of the weapon provides an advantage in close quarters combat.

The Composite Weapon "Shekinah" combines three different weapons into one piece of equipment: a giant gatling gun, a mega beam launcher, and a micro missile launcher. With this weapon's versatility, the Pale Rider Cavalry can handle various combat situation, from close-range engagements that commands high mobility to long-range shelling.

Mounted on the bottom of the Shekinah, this multi-barreled rotary cannon has a high firing rate.

A mega particle cannon mounted on the Shekinah. It fires a high output particle beam that can easily penetrate enemy's armor.

Mounted on the top of the Shekinah, it fire volleys of micro missiles.

The same beam rifle as used by the Pale Rider (Space Type). It is an enhanced version of the beam rifle carried by the RX-78-2, with improved output as well as accuracy.

The same shield as used by the Pale Rider (Space Type), it can collapse or extend to suit the combat situation.

An acronym for HYPER ANIMOSITY DETECT ESTIMATE SYSTEM. This controversial system was created by a top secret research laboratory in Augusta based on data and samples of the EXAM System provided under pressure from the upper management. Like the system used by the original RX-80PR Pale Rider, activation of the HADES improves the unit's performance. However, the Pale Rider Cavalry's HADES has a limiter to limit its operating time and is tuned down to suit normal pilots, but it still places a heavy burden on the pilot's body.

During the attack on Solomon, Pale Rider Cavalry was stored on an Antietam-class carrier that accompanied Grave's ship, the Pegasus-class assault carrier Forrestal. It was stolen by the rogue Slave Wraith team and piloted by the team leader, Travis Kirkland.

Travis attempted to sink the Forrestal and kill Grave with the Cavalry's Shekinah beam launcher. However, he was interrupted by the MA-08 Big Zam firing its mega particle guns. This caused the Cavalry's HADES system to activate and evade on its own. Though he survived, the excessive G-force caused him to suffer a concussion. After the battle, the Slave Wraith team retreated to a damaged and abandoned Musai-class ship, where Edward Lee painted the Slave Wraith emblem onto its shield.

A variant of the Pale Rider Cavalry that is not equipped with the HADES system.

About to self destruct 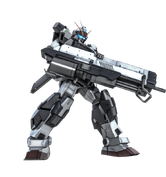