Gundam Ez8 HMC is actually one of two optional equipment packs for RX-79Ez-8 Gundam Ez-8 Kai, which is the Gundam Ez-8 modified for space combat. The HMC equipment focuses on mobility. In addition to the large backpack, parts of its armor were removed in order to install various vernier thrusters all over its body. Gundam Ez8 HMC also has a scope sensor similar to RGM-79SP GM Sniper II's.

However, the modification came at a cost. The reduced armor made the Ez8 HMC more vulnerable and since the propulsion system consumed most of its energy, Gundam Ez8 HMC must use a beam spray gun II (improved version of RGM-79 GM's beam spray gun) instead of a beam rifle. As well, the increased speed of the Ez8 HMC makes the unit a virtual wild horse, making it so that only an ace pilot could handle its speed.

Mounted in the head, the pair of shell firing weapons have a high rate of fire but little power and can't damage the thick armor of a mobile suit, though it can damage lightly armored areas such as the sensors. They are ideal for shooting down small, lightly armored targets such as missiles, attack vehicles, etc.

The standard close range armament for most Federation mobile suits. The beam saber is a small cylindrical device held in the mobile suit's hands when operated and is powered by a rechargeable energy capacitor. The beam saber emits a blade of plasma contained by an I-Field and is capable of cutting through almost any armor not treated with anti-beam coating. The EZ-8 HMC is equipped with a pair of beam sabers.

The Ez-8's main weapon, it is an improved version of the beam spray gun used by the RGM-79 GM. A beam spray gun is essentially a smaller, weaker beam rifle. It is less effective at long range, but is better at close range due to a more spread out shot, similar to a shotgun effect. While the beam spray gun is less powerful than the beam rifle, it has been shown to be able to penetrate the armor of a MS-09R Rick Dom - one of the most heavily armored mobile suits of the One Year War. 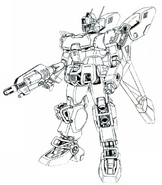