The RX-79Ez-8/HAC Gundam Ez8 Heavy Armed Custom (Gundam Ez8 HAC for short) is a custom variant of RX-79(G)Ez-8 Gundam Ez8 piloted by Shiro Amada. It first appeared in the SD Gundam G Generation Gather Beat video game, but it's existence contradicts the continuity of Mobile Suit Gundam: The 08th MS Team, and is thus considered to be non-canon.

Gundam Ez8 HAC is actually one of two optional equipment packs for RX-79Ez-8 Gundam Ez-8 Kai which is the Gundam Ez-8 modified for space combat. The HAC equipments focuses on firepower, its main armaments are dual large beam cannons modified from Salamis-class's mega particle cannon. Gundam Ez-8 HAC also has pair of manipulator arms on its legs to hold the Salamis cannons in firing position.

However, the modification to the basic frame of Gundam Ez-8 remains minimum. Gundam Ez8 HAC has quite low mobility due to the increased weight of the HAC equipment. As well, because the unit's generator can only handle the power of the Salamis cannons, the Ez8 HAC is equipped with only a 100mm machine gun. 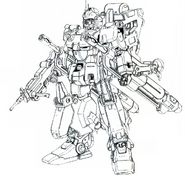 Retrieved from "https://gundam.fandom.com/wiki/RX-79Ez-8/HAC_Gundam_Ez8_Heavy_Armed_Custom?oldid=444046"
Community content is available under CC-BY-SA unless otherwise noted.