The RX-79BD-3 Blue Destiny Unit 3 is a variant of the RX-79(G) Gundam Ground Type. It first appeared in Mobile Suit Gundam Side Story and was primary piloted by Yuu Kajima.

Originally a spare mobile suit to supply parts for Blue Destiny Unit 1 and Unit 2, Blue Destiny Unit 3 was put into action following the loss of Unit 1 during the fight with MS-08TX［EXAM］Efreet Custom. Unit 3 is almost identical to Unit 2 except for the color scheme, and a limit is once again set into the EXAM System. There was a plan to paint Unit 3 in a blue color scheme like Unit 1 and 2, but this was not carried out. Like Unit 2, Unit 3 can operate on earth or in space by changing backpack. It is armed with chest missiles, vulcan guns, beam sabers, a beam rifle primarily used by the RX-79［G］ Gundam Ground Type, and a new shield.

Mounted on the head, the pair of Vulcan Guns are used to intercept incoming missiles, enemy units, etc.

Two such missiles are mounted on the sides of the abdomen and can function under Minovsky particle interference.

One mounted on each side of the suit's cockpit. These shell firing weapons have high-rate of fire, but little power and can't damage the armor of a mobile suit, though they can damage lightly armored areas such as the sensors. They are ideal for shooting down small, lightly armored targets such as missiles, small vehicles, etc.

The standard close range armament for most Federation mobile suits. The beam saber is a small device held in the mobile suit's hands when operated and is powered by a rechargeable energy capacitor. The beam saber emits a blade of plasma contained by an I-Field and can cut through most armor not been treated with anti-beam coating. Blue Destiny Unit 3 carries two beam sabers stored in the sides of the lower legs(backpack in the 2015 manga).

The shield is a simple defense used to block various attacks from enemies. It is also treated with an anti-beam coating to defend against beam weapons, however the coating gets gradually burned away each time a beam strikes it until it is rendered useless. The shield used by Blue Destiny Unit 3 is a modified version of the shield used by the prototype RX-78 series, and has upgraded edges.

The Blue Destiny Unit 3 can also be equipped with the same shield as used by the Gundam Ground Type.

A system that gave normal pilots the ability to mimic the power of Newtypes. While little is known about the mechanics of the system, the primary component is known to have been the captive soul of Newtype Marion Welch. The conflict of her soul with the bonds of the system made it extremely unstable and hard to control, to the point that the system - and the mobile suit - would sometimes go berserk. While under the influence of the EXAM System, the mobile suit's optical sensors would glow red. Like Unit 1's EXAM System, Unit 3's has a limiter, restricting it to roughly half its capabilities.

When the RX-79BD-2 Blue Destiny Unit 2 and RX-79BD-3 Blue Destiny Unit 3 were completed, Zeon special forces attack, allowing Nimbus Schterzen to hijack Unit 2 and kill Moses, ensuring that he won't be able to make EXAM anymore. Nimbus escapes to space, with Yuu and his friends in hot pursuit using Blue Destiny 3. The group chases Nimbus to Side 5, where EXAM was first made, and a final showdown begins. Nimbus declares that he's the only one worthy of using EXAM and attempts to kill Yuu. Once more, the two strike each other down in unison, but this time Nimbus is killed, while Yuu drifts in space, where he is later picked up by his team.

As seen on Mobile Suit Gundam: Encounters in Space

A Gunpla iteration of the Blue Destiny Unit 3 with 1/100 scaled arm parts, as seen in Gundam Build Fighters Episode 3. 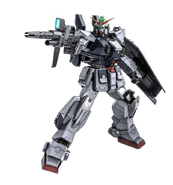 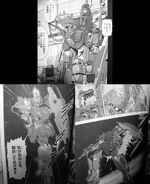 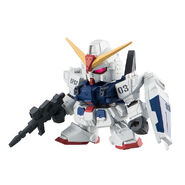 Retrieved from "https://gundam.fandom.com/wiki/RX-79BD-3_Blue_Destiny_Unit_3?oldid=468598"
Community content is available under CC-BY-SA unless otherwise noted.