In order to complete the "Demon Blade" system, True Federal decided to study the EXAM System. To that end, they attempted to recreate the Blue Destiny Unit 2 based on what little data was left in the Newtype Research Institute. The result was the Unit 2 Ω, which was equipped with a "NEO EXAM System", partially based on some of True Federal's own theories.

Mounted on each side of its cockpit, the pair of shell firing weapons have a high-rate of fire but little power and can't damage the thick armor of a mobile suit, though it can damage lightly armored areas such as the sensors. This weapon is ideal for shooting down missiles, and lightly armored vehicles.

The standard close range armament for most Federation mobile suits. The beam saber is a small device held in the mobile suit's hands when operated and is powered by a rechargeable energy capacitor. The beam saber emits a blade of plasma contained by an I-Field and can cut through most armor not treated with anti-beam coating. The Blue Destiny Unit 2 Ω has two beam sabers stored in its lower legs.

A combat system developed based on the EXAM System that gave normal pilots the ability to mimic the power of Newtypes. Like the EXAM, little is known about the mechanics of the NEO EXAM system and it was extremely unstable and hard to control, to the point that the system - and the mobile suit - would sometimes go berserk.

The completed Blue Destiny Unit 2 Ω was kept secretly in True Federal-owned sub colony on Side 7. During the test launch, the Blue Destiny Unit 2 Ω resonated with MS-19 Dolmel Douhet, a Yoto-installed MS unit inside the facility. The resulting Psycommu-related commotion led the unit to be stolen by Zeon Remnant's Suu Kyi O'Connel and escape from Side 7. 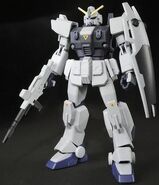 Retrieved from "https://gundam.fandom.com/wiki/RX-79BD-2_Blue_Destiny_Unit_2_%CE%A9?oldid=466760"
Community content is available under CC-BY-SA unless otherwise noted.