The RX-79BD-1 Blue Destiny Unit 1 is a variant of the RX-79[G] Gundam Ground Type. It first appeared in Mobile Suit Gundam Side Story: The Blue Destiny and was piloted by Yuu Kajima.

The Blue Destiny Unit 1 was a modified RX-79[G] Gundam Ground Type, with improved generator output and enhanced mobility thanks to the use of magnet coating and added leg verniers.[1] Weapons-wise, it had additional armament in the form of a pair of 60mm chest vulcans and a pair of wire-guided missile launchers on the stomach.[1] It was also equipped with the same 100mm machine gun, beam sabers, and shield as the Gundam Ground Type.[1]

The development of the Blue Destiny Unit 1 was led by Dr. Chlust Moses, a researcher from the Principality of Zeon's Flanagan Institute who defected to the Earth Federation, and incorporated the EXAM System, a unique mobile suit operating system that he invented.[1] Originally, the Blue Destiny Unit 1 was based on the RGM-79[G] GM Ground Type.[1] However, as its performance did not meet the demands of the EXAM System, the GM Ground Type's head, which was already installed with the EXAM System, was removed and mounted on a modified chassis based on the Gundam Ground Type.[1]

The EXAM System was designed to draw out a mobile suit's full potential for a limited time. However, it was highly unstable, and prone to going berserk, attacking friends and foes alike. Federation mechanic Alph Kamra later installed a limiter on the Unit 1, limiting the EXAM System's output at 50% to prevent it from going berserk. The output can be raised to 100% when necessary, but this can only be sustained for 5 minutes before the machine overheats.

Mounted on the sides of the abdomen, the pair of wired-control missiles can function under Minovsky particle interference and can accurately hit enemy units within a short range.

The beam saber is a standard close range armament for most Federation mobile suits. It is a small device held in the mobile suit's hands when operated and is powered by a rechargeable energy capacitor. The beam saber emits a blade of plasma contained by an I-Field and can cut through most armor not treated with anti-beam coating. Like the RX-79[G] Gundam Ground Type, the Blue Destiny Unit 1 has two beam sabers, one stored in the side of each lower leg.

The same beam rifle as used by the Gundam Ground Type, it is a redesign of the RX-78-2 Gundam's XBR-M-79-07G beam rifle. Instead of the 79-07G's large movable sensor, this rifle is fitted with the BP-SS-001 composite box-type sensor system utilized on the BR-M-79C-3 Beam Spray Gun and licensed from BOWA Corporation, granting the weapon improved targeting precision.

A cannon developed by Yashima Heavy Industries as a long range weapon for use in 1G environment. It has an alternate model number:"NFHI·GMCa-type.09/". Its design is thought to have referenced the Zimmad Corporation's ZIM/M-T-K175C Magella Top Cannon. It uses a six-rounds box magazine that is inserted into the top.

A system that gave normal pilots the ability to mimic the power of Newtypes. While little is known about the mechanics of the system, the primary component is known to have been the captive soul of Newtype Marion Welch. The conflict of her soul with the bonds of the system made it extremely unstable and hard to control, to the point that the system - and the mobile suit - would sometimes go berserk. Eventually, a limiter is set in the EXAM system by Alph Kamra, restricting it to roughly half of its output and only allowing the full output to be used for 5 minutes before the machine overheats. While under the influence of the EXAM System, the mobile suit's optical sensors would glow red.

On November 29th, U.C. 0079, the Blue Destiny Unit 1 was undergoing testing near a Zeon base when it suddenly lost control and began attacking indiscriminately. However, it was eventually disabled by the Federation's Guinea Pig Team, led by Yuu Kajima, and retreated.[1] However, the Blue Destiny's pilot was killed in the process.[2]

The Blue Destiny was later repaired and transported aboard a C-88 Medea for reassignment to the Guinea Pig Team. However, the Medea was shot down by a Zeon reconnaisance team, and the Guinea Pig Team was tasked with recovering it. Together, Yuu and his team were able to destroy the Zeon team and the MS-08TX［EXAM］Efreet Custom piloted by Zeon ace pilot Nimbus Schterzen, who was secretly pursuing the Medea.[2]

Impressed by Yuu's performance and his reputation as an ace pilot, the Blue Destiny's mechanic, Alph Kamra, asked Yuu to become its new pilot. He was then ordered to destroy a Zeon missile base north of California Base, which was preparing to fire its missiles at the latter to prevent its recapture. At Alph's suggestion, Yuu activated the Blue Destiny's EXAM System, and was able to destroy the missile control centers within five minutes. However, using the system placed a heavy strain on his mind.[3]

With the missile base destroyed, Yuu was asked to rejoin his teammates at California Base to finish off the Zeon forces there. However, the Efreet Custom appeared once again, and the two machines began resonating, causing both to activate the EXAM System.[4] After a fierce battle, the Efreet Custom was destroyed, but not before destroying the Blue Destiny's head. Since its head contained the EXAM System, the Blue Destiny was rendered unusable.[5]

Re-illustration by Naoki for Mobile Suit Gundam Side Story: The Blue Destiny (2015)

Shot in the head

Artwork from the 2015 manga 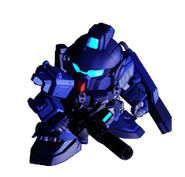 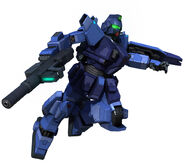 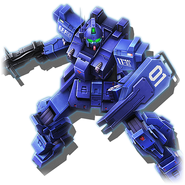 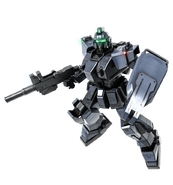 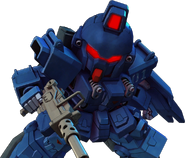 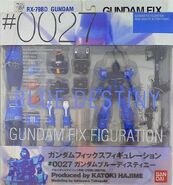 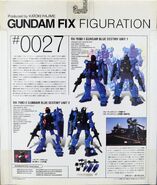 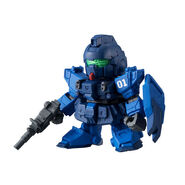