Though in many ways similar to its RX-78-2 predecessor, the RX-79[G] was a bit different in other ways, particularly in its armament. The beam sabers were stored in the legs, as the backpack mounted an equipment rack to carry weapon racks, parachute packs, or other field options. The head vulcan guns were removed, as the head now carried a periscope for underwater and trench warfare. Although sporting a smaller generator than the RX-78, the Ground Type Gundam can still use a beam rifle, though it was often equipped with a 100mm machine gun or a 180mm cannon. Two extra ammunition magazines for the machine gun were placed on the sideskirt armor. A single vulcan gun and a multiple-use "multi-launcher" mounted in the torso's left breast rounded out the suit's armament.

The RX-79[G] has two beam sabers, one stored in the side of each lower leg. The beam saber is a small device held in the mobile suit's hands when operated and is powered by a rechargeable energy capacitor. It emits a blade of plasma contained by an I-Field and can cut through most armor not treated with anti-beam coating.

Like its name suggests, this weapon fires nets to trap, immobilize and and disables the enemy; rather than destroy them. Usually used in Ambush and Capture missions.

The same shield as used by the RGM-79 GM, it is a thick sheet of armor designed to take severe punishment that would normally destroy a mobile suit. Since the introduction of beam weaponry, shields are also treated with an anti-beam coating to withstand several beam shots before the coating wears off. Typically, physical shields can only take so much damage before they succumb to the pressure and break. 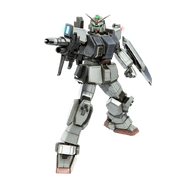 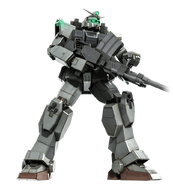 Retrieved from "https://gundam.fandom.com/wiki/RX-79%EF%BC%BBG%EF%BC%BD_Gundam_Ground_Type?oldid=442017"
Community content is available under CC-BY-SA unless otherwise noted.