The RX-79[G]WR Full Armor Slave Wraith is a repaired and upgraded version of the RX-79[G]SW Slave Wraith featured in the manga Mobile Suit Gundam Side Story: Missing Link.

After the Slave Wraith was damaged in an encounter with the RX-80PR Pale Rider, it was repaired and modified into the Full Armor Slave Wraith. Due to the shortage of Gundam Ground Type spare parts, this machine also incorporates parts for the RGM-79[G] GM Ground Type. The wearable armor, which was limited to only the two shoulders on the Slave Wraith, is now attached to various parts of the body, improving its defensive capabilities. The shield on the left arm is now the large, orthodox one used on the RGM-79C GM Type C and other models. In addition to the missile launcher, the backpack is equipped with a modified weapon rack that carries the Gatling gun of a captured MS-07B-3 Gouf Custom, and for the purpose of attaching this, the backpack was replaced with that of a regular Gundam Ground Type. In addition, the right arm has a double machine gun modified from two 100m machine guns installed behind the short shield, and the legs are equipped with missile pods, strengthening its firepower and defense to live up to its "full armor" name.

The Full Armor Slave Wraith mounted a Vulcan in the left chest. The number of bullets has been increased by mounting it in the chest, where there is more space, but the fact that it is placed right next to the cockpit has a negative impact on the pilot's survivability.

Equipped underneath the chest Vulcan. This multi-purpose launcher is capable of firing netguns, flares, grenades, and other projectiles. When not used for direct combat, it is used for various other purposes, from distracting enemies, or communicating with allies, etc.

A pair of missile launchers installed on the back, it is swung over the left shoulder when used.

A weapon looted from a captured Gouf Custom, it is a six-barrel, belt-fed Gatling gun mounted on Full Armor Slave Wraith's backpack, behind the right shoulder.

A retrofitted version of the RGM*S-Sh-WF/S-00109 with a pair of modified 100mm machine guns. This combination allows the Full Armor Slave Wraith to quickly switch between defense and ranged combat.

A pair of missile pods mounted on the Full Armor Slave Wraith's legs.

An improved model of the RGM-M-Sh-003. It has the exact same size as its predecessor, but its material was changed to Titanium-Ceramic composite. Its mount latch was made movable, allowing the shield to be positioned up or down when carried by a Mobile Suit manipulator or mounted on the forearm, increasing its usability. It can be used in conjunction with the Short Shield for additional protection.

A set of add-on reactive armor later adopted by the RGM-79FP GM Striker. Unlike the Slave Wraith, which only had wearable armor on the shoulders, the Full Armor Slave Wraith's entire body is equipped with wearable armor, dramatically improving its survivability.

After the Slave Wraith took heavy damage at Jaburo when its pilot Travis Kirkland sacrificed it in order to defeat the Pale Rider, the now rogue Slave Wraith unit escaped to a secret hiding place unknown to their former commander, Grave, where the Slave Wraith was repaired into the Full Armor Slave Wraith.

The Wraiths then tracked the Marchosias Corps to a Zeon space port, which was being attacked by Federation Forces. The Wraiths engaged the Federation attackers, and Travis quickly destroyed a GM, a Guntank, and two Type 61 Tanks with the FA Slave Wraith's superior firepower. Travis lied to the Marchosias Corps, telling them that the Wraiths were actually deep cover Zeon agents, and offered to return to space with them in exchange for their assistance in repairing a shuttle they have.

As the two teams were preparing the shuttle, the space port suddenly came under attack by Grave's forces, which consisted of a Big Tray-class battleship, a large number of GMs, and a fully repaired Pale Rider. Realizing that it is impossible to defeat the Pale Rider in close combat, Travis ordered Marvin Herriot to support him with the RX-77-3D Guncannon Heavy Type D, and attempted to destroy it with ranged weapons. However, the Pale Rider's mobility caused almost all of their attacks to miss.

Just as the Pale Rider was about to destroy the Guncannon, Travis finally caught an opening when the Pale Rider was forced to evade a bazooka round fired by Vincent Gleissner's Zaku II High Mobility Ground Type. While it was in mid-air, Travis immediately fired on it with his Gatling gun and followed up with a barrage of shoulder missiles. This caused the Pale Rider to crash into the ground, but it was still not destroyed. 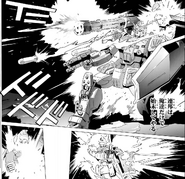 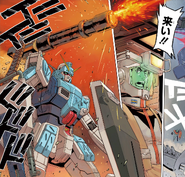 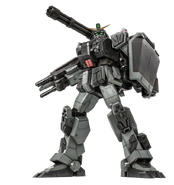