The RX-79[G]SW Slave Wraith is a mobile suit featured in the video game Mobile Suit Gundam Side Story: Missing Link.

The Slave Wraith is an enhanced, custom mobile suit based on the Gundam Ground Type. Its name comes from the "Slave Wraith" unit to which the machine was deployed. Its sensors, optical cameras, and communication equipment are up-to-date, and the head shape has changed accordingly. It is also equipped with a new high-output backpack and has various prototype equipment that is still under development, such as the shoulder-mounted wearable armor. [1] This equipment was eventually adopted by mobile suits developed later in the One Year War.

The Slave Wraith mounted a Vulcan gun in the left chest. This shell firing weapon has a high rate of fire but little power and can't damage the armor of a mobile suit, though it can damage lightly armored areas such as the sensors. It is ideal for shooting down small, lightly armored targets such as missiles, attack vehicles, etc.

Mounted in the left chest, under the Vulcan gun, the launcher fires a variety of munitions, ranging from grenades to flares and chaff. When not used for direct combat, they are used for various other purposes, from distracting enemies, or communicating with allies, etc.

The Slave Wraith has two beam sabers, one stored in the side of each lower leg. The beam saber is a small device held in the mobile suit's hands when operated and is powered by a rechargeable energy capacitor. It emits a blade of plasma contained by an I-Field and can cut through most armor not treated with anti-beam coating.

The standard armament for the Federation's mobile suit ground forces during the One Year War was developed by Yashima Heavy Industries. It has an alternate model number: "NF·GMG-Type.37/100mm". Equipped with a box magazine and folding stock, it has an excellent rate of fire and is easy to wield. It utilized a smoothbore type barrel that lacked rifling and has to be replaced after firing 3000 rounds. The weapon could utilize three different types of ammunition: HEAT (High Explosive Anti Tank), APFSDS (Armor-Piercing Fin-Stabilized Discarding-Sabot), and HESH (High Explosive Squash Head), allowing combat units to select the appropriate type to meet operational needs.

The bullpup machine gun was a system weapon developed as a Space/Ground dual-use projectile weapon. Though compact, it has sufficient anti-MS firepower while maintaining accuracy. Its muzzle velocity is increased due to the use of new gunpowder and this enables it to easily penetrate the armor of Zeon's mobile suit. A box-like sensor system incorporating a video camera and laser sensor is installed at the top, and when this system is used alongside the Slave Wraith's targeting system, target acquisition capability is enhanced.

A portable large rocket launcher meant for MS, it is independently developed by Yashima Heavy Industries for use specifically in 1G environments. Also known as Hyper Bazooka (Ground Type), it has a very versatile design with features that include targeting sensors, etc. It uses a banana-shaped magazine and has a short barrel to facilitate its use in jungle/forested areas. This weapon can utilize a number of different munitions including warheads that deploy stabilizing fins after launch, and this shows that its design took many references from human-sized ground weaponry used in older eras.

Mounted on the forearm, this small, light shield is commonly used by the Gundam Ground Type and GM Ground Type. Constructed of Luna Titanium alloy, it is designed to primarily protect the cockpit and other critical areas, and as such has a different form than the RGM-M-Sh-003 model. Additionally, it can be used as a close-range striking weapon in mobile suit combat. Furthermore, through lodging the spikes at the tip into the ground, the shield can serve as a free-standing frontal defense. This also allows the mobile suit to use both hands to hold large-caliber weaponry and maintain a stable firing position.

A type of add-on armor later adopted by the RGM-79FP GM Striker. Wearable armor is mounted on the pauldrons of the Slave Wraith. It slightly increases defensive capabilities, providing extra protection against the light weapons used by Zeon's mobile suits through shock absorption.

An optional back-mounted MS equipment created by the Federation for paradrop missions from the Medea Transport Plane. The Parachute Pack contains three parachutes and four thrusters to help in making a safe descent to the ground. Once touchdown had been accomplished the Parachute Pack would be ejected so as not to hinder the mobile suit performance in ground combat. Two types of parachute packs were known to exist.

This mobile suit was originally planned to be assigned to another unit but was acquired by the Wraith Corps due to the forgery of documents by Doris Brand, and it was operated by Captain Travis Kirkland. 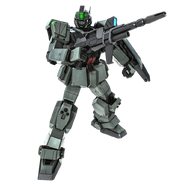 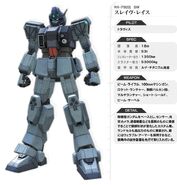